"The Melungeons Are Gonna Get Ya!" 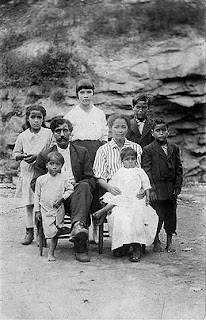 I’m always intrigued by legends. When I was a kid, I remember someone telling me briskly that if I didn’t behave, he’d send the Melungeons after me.

Of course, their social isolation in a small region of Appalachia made them seem rather mysterious, but if they were a mixed race of people hundreds of years ago, that might have been necessary. America was still in its infancy with regards to mixing races.

Being a skeptic about anything others said from an early age, I sought my own answers. Back in the early 70s, there weren’t a lot of answers, but with new DNA research and more knowledge about their kind, the Melungeons become more of an exotic breed of American than any terror that’ll make children behave.

From Wayne Winkler’s article http://www.melungeons.com/articles/jan2003.htm
“A Brief Overview of the Melungeons,” The Melungeons are a group of mixed ethnic ancestry, found primarily in northeastern Tennessee, southwestern Virginia, southeastern Kentucky. Similar groups of “mysterious” people, or at least remnants of these groups, are found all along the Atlantic seaboard. While these other groups have no known connection to the Melungeons, they have suffered similar problems due to the difficulty of placing them within an established racial category. Anthropologists called them “racial islands” or “tri-racial isolates.” Several surnames are associated with the Melungeons, including Collins, Gibson, Goins, Mullins, Bowlin. Early accounts reflect the Melungeons’ self-description as “Indians.” Some Melungeons reportedly described themselves a “Portuguese,” or, as many pronounced it, “Portyghee.” Most of their white neighbors considered the Melungeons a mixture of black and Indian, or white, black, and Indian.

Some of the more popular legends about the origins of the Melungeons were that they were from the lost colonists of Roanoke Island, that they were the survivors of a shipwreck of slaves, runaway slaves, or from pirates of different nationalities. The majority of the Melungeons fought alongside their white friends for the North in the Civil War. After the war, the Melungeons were accused of bushwhacking and raiding white settlements, but these incidents likely exaggerated over the years. And hence the tales of Melungeons going after misbehaving children.

One of the really amazing things to me as an American is how much better our society gets the more it mixes, whether it’s whites living in black neighborhoods, blacks living in Asian neighborhoods, or Hispanics living in Greek neighborhoods. The more we intermarry and mix it up, it seems the more we get closer to a new advanced human being. Through interbreeding we receive double blessings with the characteristic strengths and talents of both races of our parentage. On top of that, we create a boundary-less attitude about skin color and ethnicity to the point that "what race are you?" is no longer even an accurate or relevent question.

I think of other countries where a person could say they were “Spanish” and mean that their family had intermated with only those born and raised in Spain for generations, and then I think of saying you’re an “American” and no one can tell you what you are.

I like to think the Melungeons are a microcosim of America. They should be extremely proud of their heritage and their strength, even back when mixing it up wasn’t part of society’s guidelines. They might have paved the way for us all. No need to look at someone and say “what are you?” They would say “I am Melungeon.” And we can say “I am American” and that should end the discussion.