Are You Having a Piloerection? Goosebumps and Ghost Hunts 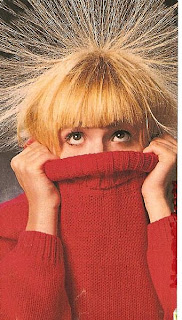 Piloerection is the fancy word for goosebumps. This is caused by the muscles at the bases of the hairs on our bodies reacting to cold or fear. The body hairs become erect in a desire to insulate the body better by trapping air within the pores. Static electrical charges cause hairs to stand away from other hairs or repel (kind of like that magnet trick in elementary school). Rub a balloon against your shirt and then run it over your hair and it stands on end much the same as what your body hairs do. Encountering static electricity, fear, or cold can cause goosebumps in haunted locations, but can the paranormal do it?

You’ve had it happen before on a dry day, in a dry environment, you reach for a doorknob and zap! Here in the Arizona desert, you get real scared around metal objects. You approach them much as someone would approach an angry dog; from the side, coming up from behind, gently, slowly, nonthreatening. Once while my son was playing a videogame, I reached to tap him and you could actually see the lightning-bolt- like spark several inches between us before I even touched him. Damn that hurt! We were both whimpering for a while after that.

But, do the sensations of hair standing on end during paranormal activity correlate with static electricity or changes in temperature or fear or perhaps a side effect of spirit activity manifesting? My mother used to say (in a soft West Virginia drawl),“I think someone just walked over my grave,” when she got goosebumps. Upon further questioning, she would admit that it came on all of a sudden and left just as quickly. The sensation of being watched was overwhelming when this occurred. That happened quite often at Aspen Grove. In my present day, inactive house, it very rarely occurs.

One thing I have observed about goosebumps is that you almost never get them when you’re at home reading a book or watching TV (unless it’s a spine-tingling read or movie). But, in reportedly haunted locations it almost always happens at least a few times throughout the evening. What’s with that? Is it because were are on constant alert and fearful or is it related to the supernatural? I tend towards the idea that our bodies are more on the alert in such a place and our hearing is keener, our vision, and all other senses we use to interpret our environment. The goosebump phenomenon would then occur more often because our largest organ, the skin on our bodies, would be much more attuned to changes around us.

Admittedly, I’ve been to lots of late night visits to spooky places and I am the most hardcore “walk into complete darkness, completely alone, sit there and listen and never get scared even one iota” type of person, so when I get goosebumps in such places, I have to wonder if something other than fear is occurring. Perhaps a heightened sense of awareness or perhaps even a static electricity situation generated by the phenomenon itself.

The issues of static electricity around electronics is so serious that great measures are taken when dealing with components to assure no static discharges that might ruin the parts. This is very telling in just how much that little spark can affect change in what it comes into contact with. Of course, that telltale zap usually alerts us, but more subtle charges could affect us and make us break into goosebumps for no apparent reason.

I’ve discussed other potential earthly conditions such as geology, waterways, construction, and geomagnetic/solar activity on hauntings, but now I’m studying the static electricity aspect. I’m hoping that the more I learn about each feature, the more I might see how they relate.

My goal eventually is to come up with a way of knowing the most likely haunted sites (by the physical features and history) and the most ideal days of the week to visit them (depending on weather conditions and geomagnetic activity) to almost guarantee a good hunt. I can then begin to keep a log that addresses all of these conditions and helps me find out commonalities on successful nights compared to lame-o nights (you know, like most of the nights TAPS went out on their 4th season). Perhaps such information could help us to not waste time in the field and also see how physical aspects of our natural world enhance or react with that which is paranormal. Most ghost hunters will tell you, “it was a slow night, maybe we just chose the wrong time to be there.” I'd like to make it so that they have the optimal chances of encountering action.

I’ll continue in my ghost hunting theories to probe this and many other aspects of our physical world and the paranormal world, hoping to find the point where they two meet.

Thanks for following the trek.