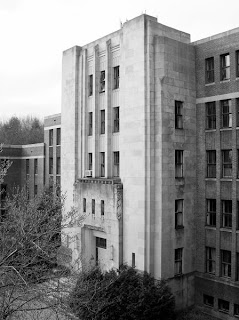 There’s a s#$%-load of abandoned mental hospitals around the country. The majority of them built in the late 1800s and early 1900s were considered to be a new and humane way to deal with the mentally ill population, and often times just those who acted up. Enough time has passed that these buildings are no longer safe and have been closed down. They were cold and without utilities and often times downright dangerous and dirty. The newer more antiseptic “day-spa-looking” mental hospitals have taken over the landscape. Some day, they too will be abandoned and picked over by the curious locals who will be amazed at how “barbaric” they were, including still using electroconvulsive therapy.

The treatments were even more barbaric before there was an understanding that illnesses of the mind are no different than illnesses of the body. To put someone aside for having a sickness of the gallbladder is as ridiculous as telling someone with dysfunctioning of the brain to please go away. We’ve made some strides and yet we still cling to old methods of dealing with mental patients from overmedicating to “talk” therapy where they cry about all the wrongs done to them, stuck in time and therapy forever blaming missed opportunities and misunderstanding parents instead of learning skills to become strong and productive. Hopefully, with enough time, cognitive-behavioral therapies will catch hold more in mental hospitals and allow patients to learn to live with deficiencies in one area while learning strengths in other areas to help compensate, as you would do with rehabilitating a paraplegic, even allowing them to rejoin us in society once again as productive human beings.

At the turn of the last century, lobotomies were one of the first experiments used, as were things like sensory deprivation and isolation, ice water baths until they passed out, and bleeding them to get these “feelings” out of their bodies.

So, it’s no wonder that as ghost hunters we are endlessly fascinated with abandoned mental hospitals, TB clinics, hospitals, and jails, perhaps because so much human suffering, grief, anger, and pain were held within their walls for decades on end. Its no coincidence that they are the first places we seek out when entering the industry. And, they are also the places we are most likely to go back to over and over again and again, each time finding something new, something provoking, even if it’s just a visceral response genetically predisposed in our DNA that makes us feel compassion and fear at foul treatment.

If we seek the tormented, we do so in these places.

An abandoned asylum wasn’t my first foray into a mental hospital. When I was quite young, my oldest sister had difficulties. She ran away from home and was molested. My parents didn’t know what to do about it and since it was 1970s and the peak of hippie lifestyles, they assumed she must be doing drugs and took her to a local mental hospital to heal the carvings she made in her arms and let her think about what she’d done.

She went into Shepherd Pratt and then later Taylor Manor where over 18 months she received over 100 electroshock therapies resulting in my 18-year-old sister coming home with no memory of her upbringing. We were all strangers to her. The only reason she ever left the expensive Taylor Manor facility was because my father yanked her out against medical advice out of fear of the amount of heavy-duty drugs that they had her on. She was the sister who babysat me and braided my hair and was my “Lillamor” or “little mother” to me. I really didn’t know how to handle this stranger that came home. She looked like my sister (but a lot paler) sounded like my sister, but looked bewildered.

Over time and lots of love, she realized how close we all were and became one of the family again, but still talk of the “old days” made her frown again in puzzlement. We developed a new relationship and she went on to have a perfectly happy life, married, had kids, was a compassionate nurse at a prison where she felt a great deal of understanding for the tormented individuals within.

What amazes me most about this whole thing is that it was not so long ago in the scheme of things, in 1970, when patients were turned into zombies with Haldol and shocked to bring “sense” to them. It was an expensive industry at $100 a day to stay there in 1970. It paid the facility to keep their patients no longer independent.

Admittedly, walking through the halls of the places my sister stayed at was much the same as walking through these abandoned sites. I could hear the faint wailing of torment and the stern footsteps of an angry nurse, and I could imagine just how much a person’s memories could be imprinted into a building, the huddling fear, their loneliness, their confusion.

Some people says prisons are super haunted, but most prisoners have only remorse when they know they’ve been caught, and the greater majority feel justified in what they did and terribly out of touch with their own emotions other than anger and resentment. But human agony, that’s another thing. I say mental hospitals are the wards of the most extremes of human emotions and if a place is to be haunted by lingering human drama, these would be the seats of agony and hopelessness.

Perhaps these remaining skeletal buildings will teach us something about where we put our mentally ill people and how we isolate them. Just spending one night ghost hunting in such a place gives people so many unsettling feelings they can't shake the memories. To me, they're mausoleums of the "old ways," may they rest in peace.

A fantastic site with a list of abandoned mental hospitals can be found here.