Netflix Instant Watch: Masters of Horror: Don Coscarelli: Incident On and Off a Mountain Road 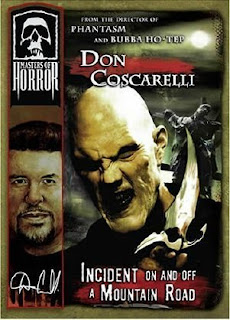 Last evening, I put a bunch of horror movies in the instant watch queue off of Netflix. I was hoping to have some good background scary movies while I worked on my novel on my laptop. The music and sounds usually help darken the atmosphere. Since I had a long day at work and a 90-minute workout, I was tired, done with my day, and ready to write. Problem is, I got sucked into this movie right away and had to turn the laptop off for the evening. That’s a good sign.

This movie is out on video store shelves and for sale, but I was lucky enough to find it on Netflex Instant Watch. This was a satisfying horror movie for a few reasons. The best reason is the atmosphere. Nighttime. Car breaks down on a mountain road. Running deep into the dark woods to escape “Moonface” the serial killer. This was well acted, perhaps not super well scripted, but the idea was a fine one and there were actually elements that creeped the heck out of me and it’s hard to creep me out.

The best element is the setting. It was ideally lit and satisfactorily spooky. Most “woods” movies are filmed in California and the woods are kind of scrawny and dry. This one takes place in Oregon and looks like it could have been filmed there in a juicy forest.

There were some novel scary elements that I don't want to give away, except to say that when you see it, note the scene as the heroine approaches Moonface’s cabin. The pathway will chill you to the bone (as will the room downstairs). I don't seek out grisly gory movies because I don't like to see it all played out, but this one had an adequate amount of goriness without being graphic. I studied that cabin pathway scene closely, wondering if I could recreate it for my Halloween party but it would take a lot of mannequins. Anyone have free ones they’ d like to get rid of???

The character “Moonface” is quite horrifying and there’s a weird touch of humanity behind him, which makes him even more sinister. He’s not lifeless/soulless, he’s thinking… It makes you believe you might be able to say the right thing and sway him.

The heroine has a lot of great background given to us in bits throughout the film and help us understand both her skill set and her motivations. There’s a twist ending that you really don’t expect and makes you want to clap.

This is a chick horror movie in that the heroine is dealing with a big bad-ass killer and she uses her wits and her knowledge to help her instead of screaming and tripping and giving up.

I have to say that it wasn’t a great horror movie like say “The Haunting” (original), nor was it horrifying like the remake of “Texas Chainsaw Massacre,” but it had this totally creepy dark element that made me feel as if I myself had just gotten off that mountain by the time it was done. It sticks with you long after. Sort of like the first time you saw the original "Hills Have Eyes" in the 70s.

I must admit, now that I’ve seen one of the “Masters of Horror” series, I’m ready for more. More reviews to follow, no doubt.