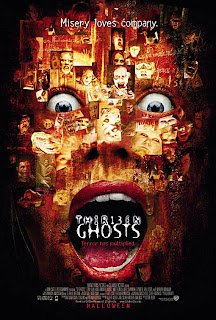 When you consider the major movie genres, horror is generally relegated to a teen-audience and therefore not usually the most well-made, well-plotted, scripted, or even acted movies. The return is great on these low-budget flicks because teens are the biggest movie-going audience out there. Even considering how meager horror movie fare can be, somehow folks in the industry keep spitting out remakes. I’m not sure whether it’s lack of imagination or simply egos at hand thinking they can do something new with the great original idea. Either way, it’s almost always an insult and I will never go to one on opening night, but wait for it to come out on DVD, order it from Netflix, and sit back on a desperately boring evening and attempt to sit through it without comparing it to the original. Part of the charm of horror movies is that you don’t know what will happen, so remaking one seems rather pointless. It’s like taking more blood out of someone who just donated. The well’s dry, guys! It’s already been tapped!

There’s been some good remakes admittedly that surpassed the original but a lot more that were horribly worse. For example, “The Haunting” was a 1963 movie done in black-and-white based on a fantastic Shirley Jackson story. This was well-acted, well cast, a beautiful set, wonderful script, perfect tension, great editing and directing. It was a masterpiece in the world of horror. Someone along the line some bozo had to get the bright idea to do a remake of something that could never be beat and then he had to be brain dead enough to think “Owen Wilson, Catherine Zeta-Jones, and Liam Neeson, of course!” when casting it. A horribly ridiculous set, completely butchered plot and subplots, bored or medicated-appearing actors (take your pick), and the worst Nellie in all the world.

Other total clunkers that had classic originals were “The Hills Have Eyes,” “Texas Chainsaw Massacre,” “Halloween,” “Friday the 13th,” “Night of the Living Dead,” “House of Wax,” “When a Stranger Calls,” “The Birds,” and “The Fog.”

But, there are occasions when a remake surpasses the original, but only by a very small margin. The original always gives it a run for its money because at the time it was made, the idea was fresh and new and the audience therefore more willing to pay for tickets for something they've never seen. (Keep that in mind, Hollywood!)

I feel “Dawn of the Dead” was better in the remake. The original was unbelievably fun but lame on the zombie factor and the dynamics of the people stuck in the mall who were kind of doll-like and lifeless. I didn’t really root for anyone to survive. The remake was funny, horrifying, and was a true story of survival. I think it worked better. I never yawned once and the ending left me wondering. I rather liked the remake of “Black Christmas” which was called “Black Xmas.” It dealt a bit deeper with the killer and his motives and had more terror than the original, although at the time the original was unique. The thing the newer version had going for it was that very few people saw the original to compare it with or recall how original it was at the time when slasher movies were still new. I much preferred “The House on Haunted Hill” remake. I think the original was so hilarious and meant to be a mystery within a spooky setting, but hardly horror. I even stored that one in “comedy” in my movie collection. It was extremely benign. The remake really made you feel demented after a time of watching the people in the house. It was very unsettling and working with the original idea, they took it to a new level. That is the case where the original was so murky that a remake made it sharper. It amazes me that someone looked at the Vincent Price movie and thought “this needs a redo.” I’m glad they did, though. I didn’t feel disappointed like I did in the original one when I wanted it to be something ghostly in the house and it wasn’t. Personally, I preferred “Omega Man” to “Last Man on Earth,” but that’s probably because it had a more compelling lead actor as far as his background and his drive. I felt like Vincent Price’s character was chronically depressed and it seemed hard to want him to survive. There was also something more attractive about the downtown location versus the suburban locations of the two movies. Lastly, “13 Ghosts” was better as a remake with horrifying ghosts and no cheesy adolescent boy and hokey ghosts. It was really terrifying and helped to take the original movie to a serious level instead of total campiness.

They won’t stop redoing horror movies, no doubt. I just hope that someone can find a mediocre original idea in a movie and turn it into something shiny and new. Don’t go after the classics. Please do not redo “The Changeling,” or “Legend of Hell House,” and please leave “Poltergeist” alone.

If Hollywood needs suggestions, here’s some I would recommend have an element that could spark but fizzled when they originally made it: “Burnt Offerings,” “Let’s Scare Jessica to Death,” "The Watcher in the Woods," “The Evil,” “and “Alone in the Dark” (not the SciFi one, the horror one).

Moviemakers will continue to target the teen/young adult group when making horror movies. What they’ve really missed out on is all the folks who grew up in the 70s when horror was kicking butt. We’re sentimental about it too, even though we’re middle-aged now. I say broaden the genre, quit beating dead horses. Horror is a really simple thing to write and produce. Every one of us has fears, most of them quite inherent. There’s a huge vat of wonderful elements to work with from fear of dolls and clowns, fear of the dark, fear of ghosts, fear of heights, fear of not having control, fear of being thought insane, fear of dying, fear of invasion…

Hey Hollywood, how many more suggestions do we need to make before you come up with something new?