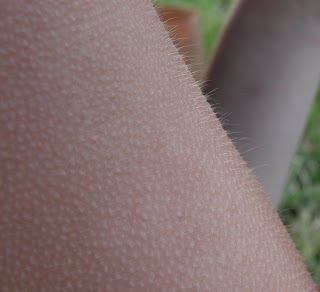 This will be the last in the series of haunted senses. I’d put in haunted tastes, but it’s not really a sense that’s used for ghost hunting, (at least not on my ghost hunts).

Sensations often associated with ghostly appearances are goosebumps, chills, “someone walking over my grave,” hair standing on end, head pressure, nausea, dizziness, light-headedness, and weakness. There is also a huge laundry list of actual medical conditions that can cause these symptoms. There also times that these symptoms suggest something of a paranormal nature.

TAPS refers to EMF (electromagnetic field) sensitivity as a potential reason for these symptoms. In fact, people living near power lines often report more psychic powers than the average citizen. For me the only time an EMF meter is truly helpful in a ghost hunt is in finding places where the fields might be so high they’re producing some low-level body sensations that cause general unease.

If you get symptoms and you don’t seem to have a reason for it, you might want to attribute it to something either physical going on in your body like impending illness or something of a supernatural nature. The truth is that people get sensations for many reasons; changes in temperatures and humidity, breezes, lack of air circulation, low levels of carbon monoxide near gas/fuel burning devices, and loads of other reasons.

EMF can potentially be upsetting to your system in high enough levels. On one house call, the parents had a lot of sightings in the bedroom and difficulty sleeping. That usually makes me skeptical because sleep can cause a lot of issues, as well as darkness, and disorientation. So, I checked the room out with my EMF meter. Alarm clocks, especially older ones, give off a good deal of EMF. I always suggest having them placed at least 4 feet away if possible. It might even help you wake up to have to get up and go to the clock, but it also could make you sleep better. Some levels of EMF coming off clocks can be high and even where the pillow is located can be still uncomfortable. This one couple, however, had a lot of devices plugged into their nightstands. Their bedroom had essentially become their home office and the EMF was nearly off the charts coming off the power strips near their headboard and where there pillows were it was amazingly high.

I laid down on the bed for a while and began to feel someone was watching me. The feeling was very intense. I turned my head and thought I saw something move. I broke out into goosebumps and shivers. I tried to go into my meditative state and it was impossible to enter. My mind was highly active, even though my body was relaxed. I moved to the end of the bed and laid down and was able to enter meditative state. We worked to move all the equipment to a side of the room where no one sat or relaxed to slept. The last report, they were sleeping fine and not waking up constantly and seeing and feeling things.

EMF aside, the variables that go into getting the “heebie jeebies” are vast. Our bodies are ready to discern changes in temperature without out advice, adjusting our internal thermometer when necessary. Sometimes, just feeling as if you’re entering a potentially haunted site can make your senses even more acute. Your skin surface area is prepared to sense a threat by touch or temperature. When you’re focused on a task, not really thinking about other things, and suddenly get deep chills running through you as if something actually passed through one side of the body and out the other, I say grab your electronic voice recorder and camera. It’s show time! There’s a very distinctive sensation that is associated with paranormal events and it’s shivers that feel as if they go from the inside outward, (some people call it "cold electriticity") often going through one side of the body and out the other, or front to back, back to front, hair stands on end, goosebumps form, and you might even feel a bit queasy.

Hair and clothing being touched is another very common event in active spots. Once you feel reasonably assured there are no spider webs, things catching on your clothing, or your hair getting caught under your collar, you can begin to take some measurements, do some recordings.

The body is an amazing receiver for paranormal activity. When you tune yourself to know the differences, you can decide whether to pursue things in the physical world as explanations for your sensations or things in the paranormal world. I honestly think that the body does more for warning you about activity than EMF meters and thermometers. Become used to how your body feels in certain situations. If you have the opportunity to try and relax next to something with high EMF, you can discern how your body reacts to high levels of EMF. I usually try to go through a place and find the hot spots electrically first and then compare those to where the owners report activity. Once we’ve gone through that first step, we can probe further the haunting possibilities.

Even the most budget ghost hunter can witness and experience a haunting with nothing more than his own senses. He doesn’t need documentation for his own satisfaction, but he does need to know his body well and use his senses as his instruments.

Of the five senses, I'd say the most important in a ghost hunt are in order:
1. Touch
2. Sound (you are more likely to hear something than see it, such as footsteps)
3. Vision
4. Smell
5. Taste (really not applicable)

I personally would like to add the sixth sense, but not everyone's tuned into that band.