Atchison Kansas: A Case For a Haunted Town 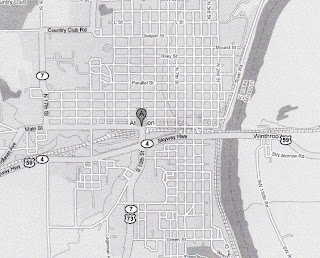 I’ve started doing my research on the most haunted places, using a 50-place sample in the U.S. I’ve started to compare the actual proof of hauntings (to give the place a haunted scale) and then the composition of the earth, the building materials, the presence of running streams/rivers/oceans, and train tracks. In doing so, I’ve come across some common factors that seem to point to the possibility that Atchison, Kansas is a perfect example of a place that HAS to be haunted.

Atchison has many reported hauntings and, in fact, has adopted the moniker “Most Haunted City in Kansas.” (Admittedly, I’d say in the U.S. if it had a more traumatic history.) Those familiar with all things ghostly have heard of the Heartland Haunting and Sally the little girl who supposedly tormented a family in their home in Atchison and scratched up the husband quite a bit. There is the Gargoyle Home built by a man who supposedly had a pact with the devil. He put many gargoyles on the home and a future owner fell to his death on the stairway trying to remove them. Jackson Park supposedly has a ghostly woman wandering its greenbelt, supposedly hung herself after the prom. There are so many other stories of the hauntings that I’d suggest you check this site if you’re interested in learning more.


I began my study with the land upon with Atchison sites. This is limestone and shale; two types of earth that seem to be most associated with haunting sites. What’s so special about limestone and shale? Well, I only profess to be a fair researcher but not a geological expert. (By the way, I’d love to find a geologist who wants to talk haunted sites). In a nutshell, shale is sedimentary rock, a combination of clay, mineral, and mud. More basically spoken, in shale you will find minerals and breakdown from life; plants and animals in the sediment of a floodplain. Limestone also is a sedimentary rock with a high mineral content. Why is this significant? That’s where my knowledge of geology admittedly ends. Until I can interview some geologists, I can make only assumptions that shale is crumbly and unstable and perhaps with its biological makeup is simply easier for earth’s energies to penetrate, but that is only supposition. For now, I can only report that I find the most well-documented haunted places are atop of sedimentary rock.

Another factor that’s common in hauntings that I’ve observed since I was a kid, but my good friend and head of the MVD Ghostchasers, Debe Branning, also voiced this correlation she had made as well; train tracks. It’s not certain just what a series of train tracks can do for a haunting. As I’ve said before, it’s hard to tell if it’s the chicken or the egg. Were more older places built near railroad tracks for travel and so the older homes just happen to be near train tracks, or do train tracks work as a kind of energy pathway for this natural type of phenomenon? Well, in the case of Atchison, Kansas, the whole place is completely scarred by train tracks running back and forth in close cluster. It’s like a beacon for whatever might travel these pathways. Perhaps it’s the iron content? There’s just no way to tell whether train tracks are simply near older more haunted sites and greater concentrations of human population or if they do have an effect on hauntings. It will take finding train tracks that were laid away from human habitation that would be helpful in finding out of perhaps homes built near train tracks after their being laid down actually have more hauntings. For now, I can take note that it seems to be something in common with most haunted places.

Water, especially running water, seems to energize these events even more. The Missouri River runs right through Atchison. Here’s a map to show the intricate makeup of this town which, if it weren’t reported haunted, it should be. Running underground streams, as well, seem to be contributing factors. What does water do for hauntings? Still another unknown factor. My guess in all of this is that it’s earth science-related, but until I gain some superior knowledge in geology and geophysics…well, I can only look for correlations and let others come up with the explanations.

The town of Atchison, Kansas should be haunted, is reported to be haunted, and has all the elements; train tracks, a river, a history as a stopping point for westward settlers, and a ground that’s made up of the sedimentary rock, shale. If you were to add into that factors such as a home being made of stone, I’d say you’d have an even better chance of haunting in that building.

My research is still early on comparing most haunted places in the US, but when I’m done, I hope to correlate foreign country’s haunted sites as well (information permitting). I’d like to come up with a theory about all of this, but it will take some time to think about and formulate my take on the phenomenon. I do see definite correlations that are hard to ignore, but how it works together is puzzling. I believe it might come down to something as hard to pinpoint as feng shui. Good land, bad land…

I’ll keep you posted as I learn more. p.s. If anyone is interested in helping me do research, let me know. I can give you a list of haunted places and you can find out what evidence is listed in regards to them.