The Phoenix Lights -- Looking at all the Angles 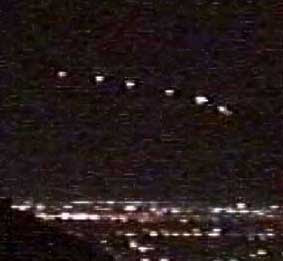 History: March 13, 1997: Lights in a formation that appears to be V-shaped are seen from Nevada, traveling southeasterly over the State of Arizona and into Mexico. The bulk of the sightings were reported during a three-hour time period by thousands of witnesses.

Going with the absolute knowledge that something was in the air that night. Let’s look at possible explanations and run the logic.

Military? This object was first seen in Nevada and traveled southerly from there. The area it originated from (Nevada) seems to be most suspicious for military craft. However, playing the devil’s advocate, why would the military fly over heavily populated areas and hover with such a remarkable craft? Wouldn’t the vast barren deserts of Nevada be more appropriate than downtown Phoenix?

Alien? If one were to consider this as an alien spacecraft, wouldn’t it be an obvious invitation of some sort? After all, they were hovering over a populated area. Not to be down on Arizona, but why this state? If you want to make a show to a population, why not LA or New York? Why not stop and say hello? Why be seen but then leave? What is the purpose of this? Could it be considered a first contact meant to have us talk about it and see how we react to such a connection with another life form? Preparing us in gradual steps?

Flares? At first the military had no comment on the event, then suddenly decided there were flares dropped in the Barry Goldwater Range that evening south of Phoenix. The flares hardly accounted for the formation of lights, the V-shaped craft some folks sighted from beneath, or the fact that it was seen traveling the entire length of the State of Arizona.

Time Travelers? It has been suggested this is our future visiting us, and quite honestly, as a die-hard skeptic about most matters, this actually seems most feasible if we’re talking about something not of our present-day world. It could even account for why there would be a silent visitation without contact. Would you want to contaminate your past? But, would you possibly like to show them that there is more than what we think we know right now? Help us to prepare for a future that is beyond our present imagination? To perhaps change a course we’re set upon? The event of seeing such a craft would aid us in getting a perspective and becoming more future-oriented. We are not alone. That could be the message, but not from aliens, but from our own kind. Perhaps more advanced. Perhaps evolved into something short and weak-limbed with a large head who’s interested in our own DNA? Their historic DNA?

What I personally conclude from what I know of the event (unfortunately, I live right under where it passed, but didn’t go outside that night), I can make a few assumptions. Something with a formation of lights was in the sky that night, witnessed by thousands over the state, as well as Nevada and Mexico. These lights were in the sky and photographed as well. It affected enough people that they activated the 9-1-1 system. This event did happen. There is no denying that.

But, as a paranormal investigator, I realize that debunking is necessary. I also know that if someone is upset in an historic house, I’m not going to jump to the conclusion that they’re possessed. I’m going to look for logical explanations. Those who jump to the alien answer are foregoing some important steps that are actually much more likely, such as this is one of our own crafts, some sort of natural occurring phenomenon, or it was a prank of some type. Until those can be absolutely ruled out, we can’t carry on a healthy conversation about what occurred and what it means to our future.

I must admit, it would absolutely change our world to know that there’s someone bigger and stronger on the block and yet they don’t have to exert their power over others as man on earth tends to do when he gains technology. If this was a message from an outside civilization, it was a subtle one. One I hope everyone gets.

And, then, maybe it’s just that we are so unthreatening that it doesn’t matter if we see them or not.