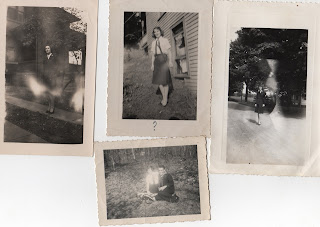 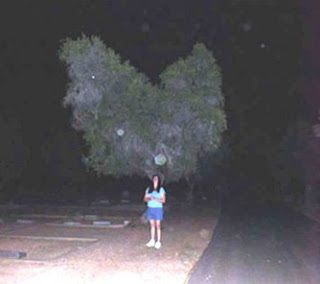 When I inherited the family photos and information (my role as the baby of the family is the historian), I also inherited a new insight into my mother. When I was growing up, mom hated to be photographed. So did my hippie sister, but I think she believed that photos were a way Middle America made folks appear what they weren’t (this from a young woman whose favorite color was “clear”). That being said, my assumption for my mother, who was overly concerned about her appearance, was that she didn’t want documentation of her aging. Still, watching her dive into the photos when they came back from the processor, searching quickly without doing the usual vain womanly preoccupation of picking apart your chin line or your smile, I realized she was looking for something. Something quickly recognizable.

When I inherited the photos, I found out what that was.

As you can see above by the collage, mother had dozens and dozens of such photos with what looked like light refractions on them. They never appeared on other family members. The same camera being used in some of them with other members, even at the same time. It always appeared for her. Not them.

There are a lot of theories about folks who tend to have these anomalies. I’m more impressed when someone gets them with different cameras, different photographers, different locations, and especially if they’re the only one in the photo affected. The explanations run the gamut from these people having spirits around them to these people affecting cameras and other devices. Admittedly, my mother did have a full visual sighting of a person who passed on when we didn’t yet have news of his passing (she said he was in ¾ size too which is pretty spooky). Still, she wasn’t one to say she was seeing dead people.

To look at her skills, I looked at my own. The wearing of watches and passing through security screens have always been hard for me. I kill watches very quickly and I tend to set off alarms on particularly sensitive days. One time, in the mall, I went through four stores setting off each alarm (with no purse or tag). They never set off when I walked out, only when I first walked in alone. I gave up and went to the pet store where upon walking through the threshold the fire alarm system went off. Later that day, I proceeded to have my computer go down immediately when I sat down in front of it and my TV to turn off when I got near it. It was one of those rare days.

When I ghost hunt, upon occasion I’ll ask my partner to take pictures of me when I tell her to shoot. I watch and wait for something I sense nearby and I stare right at it and have her take the picture. Every single time, something shows up (like above). In that case, I sensed something to my right coming up and over me and I told her to take the shot as it came above me while I stared where I knew it was. It’s a hard thing to describe except that it’s a sense of something heavy and dense near you, blocking light and sound. Sort of like being in a store and you sense someone’s standing right behind you. When you get that sensation of something dense blocking air movement near you, it’s time to take a shot.

So, what was haunting mother in her pictures? It’s impossible to tell. My mother was a mountain woman from the Depression era in West Virginia. I think she’d tell you it was her 3-year-old sister who died of whooping cough, perhaps attaching to her as she died in the house where she slept nearby. It could also be that mother had an ability to project her psychic strength in an outward way that showed on photographs. The anomalies that show up in my shots that I’m looking at, I have no way to prove whether they’re ghosts or my own psychic ability being projected out and displaying itself, caught on film.

Perhaps on a particularly good day, mother’s emotions projected onto the film or perhaps on particularly restless days she affected the camera’s abilities. Of course, it’s entirely possible that she had a bad photographer, but it doesn’t explain the consecutive shots of others in the same setting that had none of those qualities.

I like to keep that explanation open for now. Without my mother around to prove it one way or another or to interview her about her moods on those days, it’s impossible to draw any conclusions. Like the boy in “Sixth Sense,” my mother was haunted by her own photographs, cringing and awaiting some fuzzy blob to show itself. Perhaps to her it meant a curse.

I like to think of it as a blessing.

I’ve had lots of aura photos over the years and I think of the hazy patch much like the spirit energy that shows in white on Kirlian photography. A sort of spirit guide or visitation from a loved one. Something positive. It would take a powerful person to be able to help it show itself. I’d take that as a compliment. Having taken tons of photos when I used to model and do pageants, I never found anything odd on my pictures. My ability seems to be to know when to take the picture to capture something happening.

So, sift through the old family photos and see what you can find. You might be quite surprised that someone you suspected of being sensitive truly was.