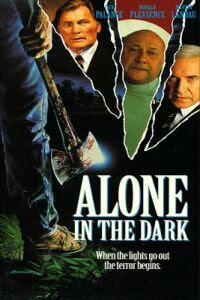 The 1980s heralded the turn in horror movies from gothic suspense to slasher. Some movies contained both characteristics during this time of change. The movie “Alone in the Dark” is one of those movies. And don't worry, the gore is very minimal.

Made in 1982, this movie has an impressive cast including Donald Pleasance, Jack Palance, and Martin Landau. Yeah, a horror movie with all three bigshots!

The premise is simple. A new psychiatrist comes to work at a mental hospital. The old psychiatrist he’s replacing moved on to greener pastures, but the patients who adored him come to believe psychotically that the new doc killed the old one and took his place. Now, they want revenge.

And they break out of their hospital to find his home and his family and trap them in there for a real suspenseful standoff.

The mental patients are fantastically developed into all your greatest fears of meeting on the street. That this innocent family has to deal with their wrath is terrifying. This was well acted, well planned out, and had a lot to say about psychosis and what is real and what isn’t.

It has a decidedly early 80s feel to it, kind of reminds me of the feel of “The Fog.” This is one in my collection I won’t part with. Occasionally, I’m in the mood for a stand-off movie with good acting and mental folks who make Jason and Michael seem like gifted children.

Give it a watch if you see it on the shelf. It’s definitely worth a look-see and perhaps even a purchase. P.S. Don’t mix this one up with the Christian Slater movie made in 2005 of the same name—that one stunk!