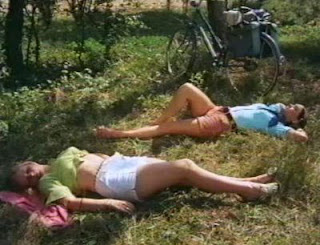 This 1970 movie ended up in my collection by serendipity. I’ve kept it because it satisfies a certain need depending on my mood. I bought it without having seen it because it was a British 1970 film with Pamela Franklin (did some classic 70s horror movies like “Legend of Hell House.” and “Satan’s School For Girls”).

This is not your usual horror movie, more of a suspense thriller. Two nurses from England decide to go on a bicycling tour of France. It’s very pastoral and beautiful in the setting and the characters show an adequate amount of vulnerability as they ride the rural backroads of France alone.

This it not a high action, fast-paced film, but because it does sort of stroll along with undertones of creepiness, it’s very atmospheric. The girls get into an argument, one of them goes missing, and while the other tries to find her, she herself becomes vulnerable to whatever might have taken her friend. The characters she encounters are odd and suspicious. It’s a good cat-and-mouse kind of plot and you certainly suspect everyone you see in the film.

I probably keep this in my collection mostly because I love that era of British films, the scenery, and the quirkiness that only a foreign film can give. It’s all done in English which, of course, makes it much easier to follow, but it definitely feels like a European film.

It has a twist ending that surprises and it’s definitely worth a first-time see if you happen across it. I keep it for when I’m in the mood for something with a dated foreign feel without being translated and that has reasonable suspense to keep me interested.

I’d be more likely to suggest this film if you liked any of these; “Psycho,” “Turn of the Screw” (“The Innocents”), or “Let’s Scare Jessica to Death.”