The Geology of Hauntings 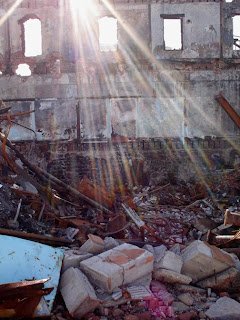 I’m living in a state (Arizona) that is geologically intriguing. We have the Grand Canyon, but also many mining towns. Not surprisingly, the heavy haunting activity and the mining towns match up perfectly. Towns such as Bisbee, Tombstone, Globe, Jerome, Vulture mine, and numerous other mining hubs have reported ghostly activity even back to when mining began in those areas. Sedona is yet another geological wonder that reports a very high incidence of all kinds of paranormal activity from UFO sightings to healing energy to vortices and heightened extrasensory perception skills.

There are a lot of theories on why geology is important to hauntings or especially residual hauntings (when an event seems to be recorded by the environment and played back continually). These theories include the conductivity of certain kinds of minerals for spirit energy and perhaps the qualities in them that make it possible to record events, to geomagnetic activity, tectonic strain, geological faults, radon gas, and magnetism.

Now, with all the current geological activity going on around the world from earthquakes to volcanoes, what would this mean for imprinting memory? Would a town crumbled by an earthquake be more haunted than a town say washed away by a flood? Local legends support that, although it's hard to be objective since the stories were often started by the survivors who had to live amongst the crumbling ruins with visions of their loved ones trapped inside.

In determining a haunted site, there should be some criteria that’s met beforehand to avoid going to a site that might not provide you with good possibilities of phenomenon. You’ll want to check the local geological maps, fault lines, railroad markings, waterways, and of course the history of the building itself—if it has anything particularly traumatic that occurred.

Some day, perhaps we’ll come up with a formula for an ideal haunting location. I’d like to see that happen. For now, it’s a helpful tool for deciding on activity and sites to study. If you add on top of that finding a day of the week when geomagnetic activity is up, you have the perfect “haunting” storm.

Here is a good source for maps of Arizona’s geology.
Here is a fantastic article about geology and hauntings and the theories behind them.