Feng Shui a Ghost Away? 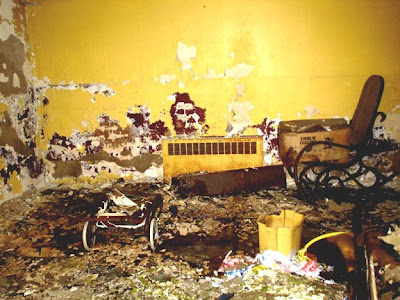 I look for consistencies in hauntings. As I often tell people, I’m a Virgo and logic-minded. It doesn’t mean there isn’t unexplainable stuff out there, it’s just that we haven’t figured out how to capture it and give it a name. None of this will be done until folks doing the research start taking note of commonalities.

Some of the commonalities I’ve witnessed are that ghost activity picks up when folks move into a place and move out of a place, renovate a place, take in a new member of the family, or lose one member of the family, or if they have young children. If they collect antiques, if they live in clutter, darkness, and loads of chatchki’s, they are also more apt to have issues. In fact, walking into a place to run a study, I can usually tell where the activity is occurring just by the way the house is laid out and even decorated.

It makes one wonder if ghosts are armchair decorators.

The principles of Feng Shui are that energy or “chi” moves throughout our environment, but depending on what’s in our environment, it can become very strong, very weak, or very stagnant. Different quadrants of a building represent different areas of our lives such as the northern part of the building represents career success and whatever you do with that room should attract and create success in your career.

I became intrigued by Feng Shui when I noted these things about hauntings that seem to be common issues. It had me wondering how it might apply to my psychometry abilities. If I have an easier time reading an object that is more dense, could it be that an environment that is very dense with objects might hold more energy there and create a situation that makes for haunting characteristics? If one believes in the concept of a ghost as a trapped soul, is this trapping the entity?

On my own, I’ve read up on it. A great book that I found is “Confessions of a Feng Shui Ghost-Buster” by Anna Maria Prezio. This has been extremely helpful for me. I have to admit, that on testing things in my own home, I’ve found many of the principles before I even got the book and learned there was a philosophy about those rules. That reinforced for me that Feng Shui is a significant study.

Have you ever seen TAPS go into someone’s home and it’s ultra modern, sleek, clean, neat, and without “do-dads?” Nope. The closest I recall them coming to a home like that was the Mansion Murders hillside home, but we’re talking about a strangely built home into a rock hillside, so that sort of cancels the whole decorating pro’s with that big Feng Shui no-no. Basements and attics are often big issues for folks. I don’t think that’s just by mistake. Have you ever seen an unfinished basement that’s neat? An attic that’s without stuff? Hmm…

According to Feng Shui, you want to avoid a house filled with yin energy which attracts ghosts. Yin is female energy (yes, ancients really did fear us mysterious females). Yin energy is dark and still, quiet and damp. Houses with yin are usually located near a cemetery or church, places where people experience pain, near or close to a burial site, houses where people died, where there are weeping willow trees or banana trees, too dark inside from trees or lack of sunlight, not enough windows, decaying houses, houses with windchimes inside, ones built into the side of a mountain, and ones where there were past owners very attached to the home. Energy passes in straight lines and does not like bends and curves. This also explains to me why I’ve noticed that hauntings occur often in roadways, paths, and hallways. I had wondered about that, as there is no logic for why they would be hampered by bends and walls. It also explains the constantly reported haunted lighthouses and their cylindrical shapes that would hold chi and have it running swirling patterns.

If we take this study one step further, is trapped chi attractive to ghosts or does it set up an environment where they can show themselves?

I have tested many of these principles in my own bedroom at night to see if my sleep changes. I have noticed differences in the quality of my dreams and my sleep. With a bit of tweaking, I’ve found ways to make an ideal sleep for me by changing my environment. That alone to me is a testament to the efficacy of considering the configuration of an environment and its contribution to hauntings.

If you want an ideal living environment, you’re going to have to some serious organizing and cleaning up. Keep pathways open, areas well lit, clutter to a minimum. I suggest you walk around your home and see how open your own pathways are. Check where it’s dark and where the mirrors are placed. Mirrors bounce back chi, and you want to keep yourself from trying to sleep in a place where chi might come in a window, hit a mirror and bounce back in a continuum over top of where you try to sleep or rest. So, basically, don’t face mirrors towards windows if you can help it, unless it's a work station or workout room where being alert and edgy helps. If you find issues in parts of your house with strange occurrences, try picking up the things around that area and leaving it clear. Play with it. Test and see what configurations work and what don’t.

If you have an adopted objects from deceased relatives, it’s always a good thing to showcase them and not store them away in a closet. If you decide to line them up together on a shelf, keep the area well lit and I’d suggest putting a plant or a desk fountain there as well. I’ve found that combination helps you to sense the love and remembrance of them more readily in your day to day life and not the loss and grief associated with the objects. They can actually nourish the living in the household.

The side benefit of all of this, of course, is that the living humans in the house will feel more at peace and relaxed, as well. Having a clear environment with no “to do” things lying around and darkening and cluttering your world allows you to rest without guilt and constantly living with a nagging voice reminding you to finish what you started.

Apparently Feng Shui is not just for the living, the dead seem to appreciate a home that is not a jail, as well.