Emotions and Trauma Leaving Imprints; The Creation of a Haunted Site 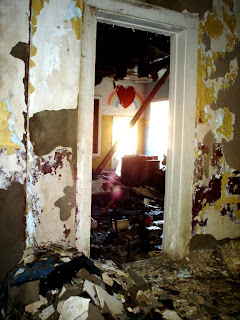 It’s probably not any wonder that when we ask people “what places do you think are haunted?” they will likely list places like; hospitals, battlefields, prisons, bars, and mental institutions. You don’t hear peoples list off; Disneyland, water parks, or malls.

Why do you suppose that is?

Hauntings are notoriously tied to emotional upset and tragedy. That somehow in that moment of death under great duress, a being is able to cling to that location and haunt it endlessly.

What if when a person passes on he simply goes to his final destination, whether that is eternal sleep or heaven? What if, however, the moment of great anguish did imprint itself on the environment and is contained therein, ready to be released under the right conditions?

This is the theory behind residual hauntings.

Of course, all of ghost hunting is under the umbrella of “pseudoscience” until something tangible is discovered and recognized by science. I like to knock around some of my own theories and ones that are circulating, trying to find commonalities.

In this early period of research into the paranormal, some look to “old knowledge” for guidance. The assumption is that if early people could do amazing things like build pyramids, they might have contained some knowledge that made them more superior at understanding the earth. One of those ways the ancients excelled was in the use of gems and crystals for their power. It was believed that quartz held the life force of the earth as it formed and can readily hold and release energy. Healers often use crystals. They follow this by rinsing the stone pointed downwards for one minute under cold running water to “erase” the memories it contains. They believe that if you inherit a ring from a great aunt you didn’t particularly think was a happy woman, you might cleanse the ring in this manner. By wearing it, you create a new body of “knowledge” in that object, hopefully happy experiences.

Whether or not one believes in old knowledge, this explanation helps us to understand the belief system behind geology affecting hauntings. The right rocks, the right emotional situation, and – boom! A traumatic memory is recorded. If you follow this line of belief, a blissfully happy memory should also be contained within the right site. Serendipitous moments when you feel a sudden onset of an emotion out of place with what’s going on, could be the moment you just stepped into the “memory soup” and felt what was felt in that place in the past.

I like to use the Lincoln Memorial as an example. This magnificent memorial is made from marble. Marble is made from limestone and dolomite crystallized, compressed by heat, liquid, pressure, and chemical action. This is intriguing because limestone is considered to be on of the best “haunting site” contents, along with granite and quartz. The theory would be that marble is made under great pressure in the earth and sandstone is made from sand-sized mineral or rock grains in a sedimentary bed. The connections with the earth, pressure, and moving water are thought to make them ideal to hold and release events like a recording device.

When I stand before the Lincoln Memorial, I feel a great deal of things. It is huge. I am an American. I respect what he stood for. I feel comforted that he was one of our forefathers. I, however, feel emotions that are immensely out of proportion to viewing the statue. I grew up near DC and saw the monument many times. Still, each time it made me want to cry. Usually, I did cry. Sometimes, I rushed away. I couldn’t understand the feelings that erupted. I had seen the King Tut exhibit,gone inside the White House, stood atop of the Empire State Building, but this monument made me feel like I was visiting a newly deceased relative. Was it possible that this monument where millions of people every year stand and admire and read the words of Lincoln might feel immense pride and strength? Could their combined energy over time in a marble monument have recorded a huge range of emotions?

I know from reading objects that newer owners of the object do overlay memories on it that are sometimes stronger than past ones, but not always. There is usually a predominant owner that is easier to read, but the freshest owner (most recent wearer of the item) can be exceedingly easy to read, even if they only wore the item one time. What does this mean for an environment that is haunted? Over time, it can become unhaunted. Yes,I do believe this. I think with enough newer families living in a place, old memories are less accessible. Renovation sometimes releases old memories, but once the family settles into their new environment, they begin to lay down a track of memories. My family was perhaps the second or third family to live in Aspen Grove since the Civil War and we had a great deal of haunting activity. The people who bought it from us had a good deal, as well. Further down the line (many owners since) there have been less and less reported incidents.

I believe that any spot in a house that seems to have activity can be changed by several manners. One is to study practices of feng shui and keep it clear of clutter and darkness, which combined make an ideal setting for things to be trapped. Another is to give the area new memories. One person had issues with their children’s closet. It was a connecting closet between two bedrooms shared by two siblings. Nightly, the girls heard something thumping around in it and scratching. We opened the closet doors and set up the Barbie playhouse inside and the dolls. I had the parents keep the windows open for lots of sunshine. The girls played in there every day, giggling and having a good time. Mother would come and serve them tea sandwiches like they were on a special vacation. When fall came, the parents reported they closed the closet back up again because the girls didn’t have time to play, but the sounds they heard previously were completely gone. It’s been several years and the issue hasn’t come back again. That’s another indicator that it is possible to re-train an area of the house by using it for a good purpose, an altar, meditation spot, place to read to children.

The question becomes whether the environment itself contains the residual memory of an emotion or event or if emotions somehow leave a residue that can be imprinted anywhere. Do we as humans sort of “mark” our territory by our range of emotional outbursts? You can see how so many theories abound on this subject. It will take a good deal of research to tie hauntings into a common thread that tells us just how residuals occur and how they are released.

A theory written about this online that is worth investigating is here. It has some very good points, but for me doesn’t cover how residual hauntings can occur when no one is there to activate them, such as footsteps in another part of the house. Still, there are definitely some strong concepts in this article worth noting.

I will continue knocking around theories and hopefully gathering more info on the subject to make more specific theories, but for now I enjoy the open-minded part of research where I explore and find commonalities. I hope to follow this up later on with more examples I've gathered over time.