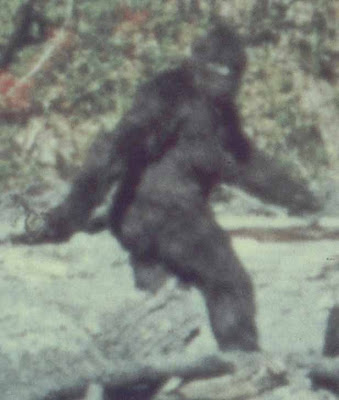 Even though I consider myself a ghost hunter, I’m interested in all areas of the unexplained and my second favorite subject is Bigfoot. This North American Great Ape as some would call him, is a puzzling creature. Although for centuries Native Americans have reported such a hairy man of the mountains, it was until the October 20, 1967 Patterson film taken in the Six Rivers National Forest in Northern California, that people began to openly debate the existence of this cryptozoological creature. The film can be viewed here.


The skeptic in me has to debunk before I can move on and say something is extraordinary. I’ve seen this film nearly all my life, but never stopped to really analyze it. I simply dismissed it because of the context in which it was taken. I tended to dismiss this film because these two men went into the woods to find Bigfoot with a camera. The setting in which this occurred to me was always suspect. Had they just happened upon him while filming a fishing trip, I admittedly would have reviewed the film much more hopefully.

That being said, I’ve had enough time and maturity and basic knowledge in debunking now to review the film again with a clearly open mind and trying not to put it in the context of two men happening up the very creature they were hunting. When I see the film on its own as a piece of hard evidence without any personal stories by witnesses, I have to admit to being strangely unsettled.

Here are just some of my questions:

Where is the profit? Had other men made a movie about a Bigfoot for attention or notoriety, they would have likely made a huge business out of it like you see Tom Biscardi (refrigerator Bigfoot fame) as if it were a three-ring circus. I didn’t see that kind of authority and leadership from these two men. They didn’t seem to want to be famous, just to be believed. That they didn’t become the leaders in Bigfoot research is worth noting. These shy men really didn’t rush to go before cameras or talk about what they saw. They had the potential to lead the way in research and yet they backed off. I am also impressed that the film did run out and that showed a certain shock at running into the Bigfoot when they did. They were at the end of a reel and didn’t realize they might actually run into this thing. Had they planned it, the film might have been performed at the beginning of the reel or the middle, certainly not at the end when they ran out during filming her leave the area.

Why take on such detail? Other men would have given less full-frontal Bigfoot, fearing that the suit could be identified. They would have captured him walking between trees. They also would have filmed him with a steady hand, not the shaking hand of a man who stumbled from his upset horse. They also would have portrayed him as sexless. The fact that this Bigfoot obviously has breasts is quite astounding, as well as their natural pendulous shape and hair covering like an ape. This was the 1960s and hardly primitive times and yet man hadn’t been having the decades’ long debate about the fine details of Bigfoot’s feeding, movement, and attributes. To have realized the details such as the swaying hair covered breasts and the interesting half human/half ape face was unbelievably brilliant.

Why did she react that way? When I saw the film in review, I couldn’t help being caught up in the setting. This Bigfoot was near a creek, a likely hang out. She was in a location others had recently seen prints which is why Patterson and Gimlin went there. She didn’t react as I would expect someone portraying a Bigfoot would. There was no racing off and out of the scene in a hurry, afraid of men on horses. She seemed cautious, but in no real hurry to run. She felt no imminent threat, which is astonishing considering she probably had never seen a man nor horse before. This female knows she’s high up on the food chain. She paced herself to leave the site, but continued to make eye contact. There was something very natural about that response. I would have assumed she would have gone on the attack or ran away. Obviously, she’s been up against bears in the woods and perhaps deer and elk and the sight of man and horse was surprising, but rather more creatures she must endure sharing the woods with.

Why does she move that way? The biomechanics of the way the Bigfoot in this film moves have been analyzed to death with folks in costumes and others measuring each frame and reenacting it. It is nearly impossible to move in just the same easy and casual way with the posture the same as the creature, its proportions so off of human’s. The way it moves its shoulders and head as a unit shows its lack of neck length that is closer to an ape than human. The movement of muscles under the fur is something that I would only be able to guess, but in 1967 they certainly had nothing like that in the movies of the time or they would have had a blockbuster on their hands. The size of the leg muscles is perfectly in keeping with propelling such a heavy beast on two legs.

As you can see, it’s easy to go on forever with questions and find three or four varying answers. Depending on what you want Bigfoot to be or not to be, you can adjust your answers. If I had to decide on Bigfoot’s existence based on the film alone and not all the thousands of reported sightings and foot castings and other photographs, I’d probably say I refuse to decide. One film can’t make a case. But, when added with other evidence, it seems to be that a large ape-like man does wander North America and is occasionally seen. That he is seen rarely shows a level of intelligence and perhaps a need like man has to dominate the far reaches of the woods where he can be king.

How will we go about finding Bigfoot? I doubt it’ll be two redneck hunters with a refrigerator for storage. Nope. It’ll more than likely be how we view bears nowadays, wandering into a neighbor’s pool for a drink when the drought becomes unbearable. I don’t think we’ll go find him. I think he’ll stumble upon us when we encroach even closer to his territory.

Although I readily admit I do believe in the existence of Bigfoot, as far as the Patterson-Gimlin film is concerned, it is becoming more and more likely to me that this was film of something extraordinary. As a story goes, the plot was too perfect with them entering the woods to look for the creature, but the timing of finding it, with Patterson falling off his horse and having a shaky camera, being at the end of the film, finding the creature near a creek, and the fact that for a few seconds the creature is very clearly visible for review, I find something very genuine about the whole thing. I’ve never let myself connect with just the creature in the film and see if it rang true as a real creature of a man in a costume, but after watching it dozens and dozens of times recently, I feel as if I am looking at something not man. Not ape. Something extraordinary. And not because I want this film to be real (I always assumed it wasn’t), but because the creature itself is compelling enough to not seem fashioned by man but nature.