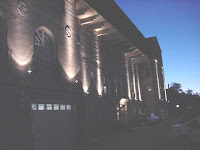 I visited this hotel when I very first started ghost hunting in the early 2000s.

We walked up to the 5-story hotel cut into the hillside and we all stepped back. The façade almost looked gothic in the setting sun and the bats were beginning to go nuts, flying spastically back and forth in front of the structure. I felt a chill as we stepped inside and lost sight of its mass and our eyes became accustomed to the lobby. T

The old-fashioned elevator caught my eye right away.

I arrived at The Jerome Grand knowing nothing about it, except that it used to be a hospital. I didn’t want to be colored by anything anyone had experienced and even chose a room at random. I bought a few postcards as I always do and stepped into the old elevator for the ride up one floor. Not a big leap, but I just had to know what riding it was like. Our room was atop of the lobby. It a nice long room with two beds and a bath. It had a very clinical feel to it because the obvious architecture of the prior hospital was evident.

We quickly gathered up our cameras and set off down the hallways that were lined with antiques and had that musty old antique shop feel to them. I fully expected a cowboy in his attire to step up the stairs. We wandered the length of the place, checked out where the restaurant was at one end and I entered the bathroom nearby. The women’s bathroom had a “I’m being watched feel” very strongly. It was almost impossible to use the stall without studying the top of the walls with curiosity and tension and a bit of performance anxiety.

I washed my hands and got a chill that made me shiver wildly. I looked around me, but I was alone. I heard the intake of a woman's breath right behind me and swung around. No one was there.

We had a nice supper out in the “downtown” corridor. The whole place had me unsettled, admittedly. It wasn’t even my fear of heights—the drive up I had to close my eyes (thankfully I wasn’t driving), but the people and the place just have a very strange feel. Bisbee has a similar feel, but in Bisbee you feel they like to hang out. Here, they felt like they liked to tuck in and hide behind shuttered windows. It was very weird. I only feel this much an outsider when I visit relatives in the hills of West Virginia where we could shut down all conversations at the Dairy Queen by stepping inside and not being from around there.

Other than a few orbs, the hotel didn’t offer anything, but I do admit I started out my first few months of hunting with only a digital cameara. I found it very hard to fall asleep. I lay there on the bed staring at the bits of light coming in and hitting the ceiling. My body was exhausted, but my mind was active. I felt the same sensations I felt in my childhood home which was also a hospital in its past. I felt like I needed to be alert in case someone needed me—a sort of phantom nurse syndrome as I once called it.

Somehow, I finally nodded off. I heard coughing in the room right near the door at the foot of my bed. The corner of the bed felt like an insistent child was shaking it to get my attention. I waited before opening my eyes. Perhaps it was someone in the hall? My hubby? I opened my eyes and the coughing came in another set, right beside the trash can. Most definitely in the room. I squinted into the darkness and shook my head and went back to sleep. I awakened again. With no clock for reference, I didn’t know what time it was but I heard the coughing again and I could still feel the vibration at the foot of the bed as I became conscious. The coughing came from the exact same spot, perhaps 8’ away from me. I got up and tiptoed over to the trash can where I’d heard it and the looked at the door. I swung it opened and studied the lit hallway. Not a soul in sight.

I closed the door and went back to bed, falling into a deep sleep. I awakened again to coughing in the same spot. I sat up in bed and studied the trash can area while it let out one more cough while I was fully awake. It was definitely in the room! The sound of it was just like my mother’s emphysematous cough.

I once again checked outside the door. No one anywhere. I knew there wouldn’t be. When someone walked down the wall, you could feel it in the floorboards. It had been very silent that night. In fact, there were only a few of us visiting the place.

I heard the cough two more times during the night and I think in a groggy voice I even said “what do you want me to do?” which must have awakened my hubby somewhat because I heard him murmur something and turn over in bed, probably thinking I was talking to him.

Admittedly exhausted the next day, I made it down the mountain with my eyes open. Somehow, my weird fear of heights only bothers me when I’m going up, not down. We got home and I started sorting through pictures and then decided to check on the background of the building. Was it haunted? It had been a hospital, it should have been haunted.

I found that many people reported issues with the women’s bathroom and with coughing in the rooms (believed to be miners who were in the hospital there). I was able to tuck that experience away, pleased with the findings, other than at the time I only used a camera to capture phenomenon and didn’t think to leave it near my bedside.

I did something right, however. I liked to go to places cold so that whatever I read would be accurate and not tainted by what I knew about the place. I still prefer to do this. I don’t mind knowing what the building once housed, I just don’t want to know what others have experienced. I still insist on going about it this way.