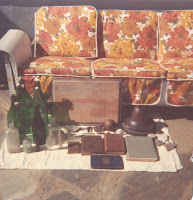 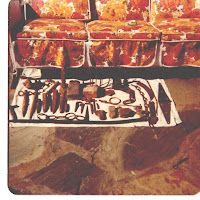 This is only a small sample of the artifacts we had on display at Aspen Grove.

I admit I was nearly born with a metal detector in my hand. I think it was one of the first things I learned growing up at Aspen Grove. Mother taught oil painting in a beautiful window-lined room in our gracious manor home and in her spare time (while raising five kids) managed to be a very astute historian. She was responsible for getting the house on the historical register and learning of its history as a Civil War Field hospital taken over by the Union soldiers and later reclaimed by the Confederate, so that both types of soldiers agonized and died on the wooden floors we walked and ate and slept upon, still staining the wood with black blotches from attempted surgeries.

My mother had a giant showcase in the art room that displayed the relics we’d unearthed. When any of us kids were bored, we’d simply grab the metal detector and wander the huge property. We had a crazy assortment of everything from tons of Native American arrowheads (the house was originally built as a fort against Native people) and included bayonets, gun parts, more bullets than anyone should have to display, all kinds of kitchen tools, and parts for horseback riding, horseshoes, and carriages.

I remember one boring winter when my brother and I went into the basement crawlspace. It was an area under the kitchen (which was an added on room more recently). The kitchen sat up above the dirt ground and allowed about a 3’ tall crawlspace. When you walked down the basement stairs, you’d look to the left and see this opening and the dirt. We both crawled in and scrambled around past the resting black snakes who wintered there. (Yeah, it was that kind of childhood that I caught and played with grass snakes and black snakes, snapping turtles, frogs, and made pets of wounded geese). We took the metal detector and began to dig under the stairs. We came across something strange. A piece of graying fabric. When we pulled at it, we found a medal on it. A military medal of some sort. Nearby, we found the part of a brim of a hat. We were onto something. It all looked quite mummified which would make sense since the basement crawlspace was powdery silt. My brother dug deeper, his hand grasping something, and up came a long bone. Either an arm or leg bone. We didn’t know a lot about such things as kids, but in retrospect by the size of it, it wasn’t a femur, perhaps a tibia bone. I say that as someone who works in the medical field. I didn’t have that knowledge as a kid, but looking back by the shape and size of it and nearby “uniform” pieces, I’d say it was a tibia. We both quickly buried it back up as close to the original finding as we could. We feared upsetting the ghosts in the house and we feared mother displaying them in her showcase.

My brother seemed a bit more anxious to unearth the entire body, but my sensitivity kept him from doing that. He was a big brother and I was quite upset at the prospect of bothering the dead. I wonder sometimes if he went back to inspect it or dig it up. A great deal of activity in the house occurred following the disruption of these things, but there’s no way in retrospect to know if they correlate. True ghost hunting wasn’t really in existence in the late 60s/early 70s, except for the Ouija board type of hokum.

We never excavated the crawlspace again. We never went out and said actually why we were avoiding it, we just never brought the subject up.

I had a sense of the soldier’s name and I told my mother a story about a soldier who stayed in our house in the past. She smiled and patted me on the head for the creative little girl I was, but at the time I didn’t realize I was reading objects. I wandered the property using my “imagination” as I came to call it. I was drawn to one area near a row of English boxwoods. I kept kicking at the ground there and pacing back and forth. Every day, I came outside and that spot called to me. I couldn't go play or do anything until I answered the call for inspection.

I kept picturing a little boy darting in and out behind the boxwoods. I finally got frustrated and took out the metal detector. I knew something was there. I knew a boy was tied to that place. I couldn’t explain why. I still to this day can’t explain why I can know things. I just accept it, as weird as the talent is. I took the metal detector to the spot where I’d kicked holes into the ground and found a hit. It was perhaps 2’ long. I was curious. I had to know, so I got on my knees with a hand trowel and began to dig furiously. About 18” deep into the soft black soil I found something.

I reached in and pulled it out and felt an immediate jolt of recognition. It was something of the boy’s. Most definitely!

I held it up and studied it. Some kind of metal soldier. My hands dug at the bare earth without the tool, now. I knew there were more, in a perfect row. I lined up the tin-like soldiers on the ground and studied them. I looked up and around me, expecting to see the boy. I felt a strange giddiness like he was thrilled someone realized he’d been there.

Then, it dawned on me, who would realize I had been here?

I would spend the summer trying to figure out where and when to plant a time capsule. Of course, distractions get in the way of the young and once his soldiers were unearthed, the sense that he wanted my attention was completely gone. I went on and did my own things and completely forgot to plant my time capsule.

Occasionally, when I passed by the display case in the art room, I'd see one of the soldiers standing upright while the others were still lying down. I'd open the case, put him back in place. Sure enough, a few days later, another one would be standing. It was like a game we played. I'd tell him I recognized that he did it, and I'd put the soldier back. But, the little booger still kept messing with them. Perhaps he had a little sister he liked to torment during his visit upon the earthly plane and I was taking her place, but I already had two big brothers and wasn't in the market for more. I tolerated his antics. It was like our little secret game. I heard my brother comment once that I should leave the soldiers alone and I asked him what he meant. He said he saw one of them was standing and mom wouldn't be pleased I was opening the case. I had to smile when I heard that. It's always reassuring to see others witness the same trickery. You feel a little less "imaginative."

I wonder sometimes if he still wanders the property. If he’s looking for his long lost soldiers. I understand future owners took the collection with them instead of leaving it with the house. I can only hope there was a curse placed upon them to anyone who would desecrate the history of Aspen Grove.

May they be tortured by the spirits of those who were tied to the objects. (Most hopefully by a vindictive little boy with mischief in mind).