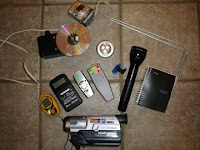 I started ghost hunting when it wasn't on TV yet. I didn't really know what folks in the field might be using, other than a digital camera, so I set forth with that first. I borrowed my hubby's old one the first year, then squirreled away a little cash for a $150 model the next year that was my own. I cut the strap off right away--realized I don't ever want to wonder what ended up in the picture. For that matter, I tie my hair back too and fan my fingers our when I take the shot. These are things you learn in the field, but there's no reason you should be fumbling in the dark like I did. I think the digital camera is the number one tool. A 35 mm is good too. I just prefer being able to come back from the hunt and review shots right away. Even if you get no phenomenon, keep the shots. Some day you might want to reference that place again. I've heard that choosing a digital camera with the flash further from the lens is better to keep from getting tons of orbs, but anywhere you go hunting is going to be dusty and I don't think they make a flash that far from the lens.

Later, I bent some rods and made my own divining rods and brought a pendulum. We'd ask questions and see if the pendulum would move. We'd walk around a site with the rods and then if they crossed, we'd take pictures. I eventually put these in the antiques file. They could potentially be useful, but not for any scientifically verifiable reason. There could be something going on that affects them, but I'd rather use other tools to see if what they found was accurate.

I moved on then to more scientific methods, or pseudoscientific depending on where you stand in the biz. I got an EMF meter (black device in the photo) and a thermometer (yellow device) which also gives me ambient temperatures. One thing I don't like to see TAPS doing is using the thermometer gun. It measures objects, not ambient air. Great if you want to know if the wall cooled off, sucks if you want to know if the room's air cooled off. I've considered getting a cheap watch at a sporting good store/camping store that is a watch with a barometer and thermometer. Sometimes in sites the pressure does seem to change like it does when there's a hurricane arriving and I'd like to verify that. That is on my list of must-have's right now.

Moving on, I added our family camcorder. It was great for setting up and leaving to record and area. Sometimes things happen when you're gone. Actually, probably more likely to happen when you're gone. Some digital cameras (the better models) have a built in video capability, but the quality isn't great, but in a pinch it's a consideration. If you buy a camcorder with digital camera capability, then you've got a better device.

I've added other accessories that I learned I needed like the flashlight, the little flashlight ring that shines a blue light and can be velcro'd to my finger. It makes it possible to work without getting light affecting shots and yet not falling into holes in the floor at the same time. Notebook--keep meticulous notes. You should have someone on the team who just does notes and times and locations and events. I added a tap light because it can easily be touched and turned on (round device). Set it out and show the spirits how to use it and hope for a lucky click of light.

I wanted to talk to the dead, so I got a $99 Best Buy hand held digital recorder (slender silver device). It's easy to use, easy to transfer to the computer and listen to. I found that EVP is a great tool, but the problem with it is that a lot of sites are just too noisy. I've been to very few places I was actually able to get legitimate recordings because there was no traffic, airplanes, wind, or other people nearby. You want to sit with your environment a good 15 minutes or more and see if it's sound-proof enough to record, otherwise you're likely to listen later and get excited at a car backfiring. Also, if you are recording and there's a sound, even if it's someone in the room walking, shuffling, or coughing, announce it, "please disregard, a person was shuffling" for future reference when listening later on the computer.


Eventually, I had enough of seeing TAPS having success with the KII meter (gray device with colored stickers on the top) and I got one. I never thought I'd stoop to gadgetry, but after trying it out, I realize it's better than my EMF meter. My EMF meter is really only good when I can cut out all the breakers in the place and know there's no electriticity going to devices. The cool thing about the KII is that it's a tool electricians can use to find out if a line is live or not and so you really have to have it up against an electrical source for it to go off. You set it in the middle of a room and it's not going be picking up stray stuff. It needs serious contact. Stick a penny under the lip of the thumb depression "on" button and it'll stay on for you while you talk and try to get responses. So far, I've never had it light up which makes it even more promising as a tool.

I later added on a homemade strobe light. I thought if something in the environment is moving at a rate of speed that we can't see it, perhaps slowing it down so the eye can capture it would help. This is definitely not for the weak, it'll give you a migraine and can give seizures to folks with epilepsy, so be careful. I try it out for at least 15-20 minutes in a room that seems active. Nothing yet, but I'm hopeful. If you take shots with your digital camera of your ceiling fan, it can actually give you stop action on the blades, capturing something moving fast and stopping it for you to see. I figured the strobe would give my naked eye the same opportunity.

There's a lot of other tools out there, like thermal imaging, but it can get so many false readings, it's just not good enough for me to fork over a few grand for it.

If you're starting out, the basics you'd need are the simple things; a camera, a flashlight, a notebook. Move on if you like and make your own divining rods if you can't get an EMF meter. Don't go too nuts if you can't check EMF and temperatures because there's just no true way to verify what you get, false readings are too easy. I'd rather capture the spirits myself with proof like film and audio. An electronic voice recorder might be your next happy addition, and then if you get very ambitious go for a camcorder. I've truly found that folks having sensations of chills and hair standing on end, pressure in their face and head, and trouble breathing is usually a fine sign to use recording devices rather than EMF or thermometers. It's nice to be able to see that they correlate, but I'd rather not waste the time registering something the human body is better at noting. Instead, taking pictures, begin to do audio.

Like any other business, as you move on, you upgrade and you toss things out. I'm no different than the rest. I'm pretty happy with my tool kit for now. Some day, I hope to get my engineer husband to sit still long enough to design me a piece of test equipment no one else is using. He has some intriguing ideas and he's a complete disbeliever, so he wouldn't want me to use anything that could give false positives. I'll let you know when he cranks something out.

For now, I'm pleased with my most favorite tools I don't like to go without which are; digital camera, electronic voice recorder, camcorder, and of course all six of my senses.