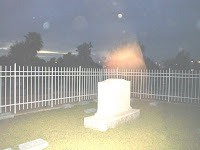 Since 2003, I've returned many times to Double Buttes Cemetery in Tempe for an ongoing puzzle that I want answered. Why have several different cameras, several different photographers, and many years of return visits produced continued strange photographic phenomenon at one family gravesite? It's the Wolff family grave--white fencing--east of the caretaker's shack.

PLEASE LOOK AT THE BOTTOM OF THIS PAGE TO SEE A STRING OF THE PHOTOS TAKEN FROM 2003 ONWARD. These are only a sample of the things we've gotten on film. Different photographers at vastly different times with different cameras have captured the rainbow effect. It peaks and then dissipates, but it's always in the same orientation no matter which angle you film it. The blue seems to emanate from one grave area of the 19 or so family members.

We've never come to a conclusion about it. We can't recreate it and we can hold the camera steady in place and get it peaking and then disappearing. It really can't be anything about the place that causes it or holding the camera level and taking shots should have the same phenomenon in every shot.

I've always wanted to encourage others to go there and check it out and see what they get. It seemed like the more often we visited, the more stuff happened right away when in the beginning it was a rare occurrence. Admittedly, it's near a butte that was right where HoHoKam canals branched off and Native Americans surely lived there because of the ideal viewing area for approach of enemies. I have no idea if that is a factor in it, but the land there and the cemetery are very strange.

They have a gate on the place now, although there is a back way that's ungated near the stadium/resort roadway behind the cemetery (opposite from Broadway). I don't want to encourage folks to get into trouble because they would be if they were caught there, but if they find themselves there at sunset that's when it really starts to act up. I'd be curious to know if anyone finds anything. For every shot below, I have loads of others that show the consecutive order of the phenomenon growing and changing. The one mist structure shot wove itself in and out of the bars during the shots until it just disappeared all at once. I could see it on the screen of my camera, but not with my eyes. I have to laugh at that shot because I was so excited by finding it, I emailed the shots to my friends and had nicknamed it "penis" since...well, that's what it looked like. They got emails titled "weaving penis," "strutting penis," and "limp penis." Unfortunately, some of them only email at work. Oops! I had to rename it to mist structure, but heck, I chuckle every time I see it. At the time it was happening, it was actually quite strange. I felt that weird prickly cold through you feeling you get when you walk through and active spot in a haunted house. It wouldn't stop either. The sensation lasted as long as I kept taking shots. I even talked to it and it seemed to make it move more. I cannot logically explain it at all.

Some experts have speculated it's a vortex. I think that the way it's localized might be the best explanation yet. I did rush over during the "aurora" shot and handed my camera to a friend who continued to get the pink haze, but the EMF meter and thermometer showed no differences and I felt no different standing there, although while I was there, the phenomenon stopped, but I had enough time with it going to get the readings.

Let me know what you think. I'd be curious to get input from people whose opinions I hold in high esteem. It's certainly a puzzle.