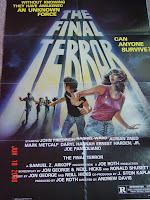 I tend to list my horror movie collection in a way that makes it possible to find something depending on my mood; woods, darkness, beasts, devil, witches, haunted houses, stalkers… you name it. Different times of the year, I’m in different moods for horror. In the springtime, for some reason, I pull out my woods-themed ones. Perhaps because the world is starting to get greener again this time of year (yeah, even in Phoenix). My top 5 favorites of the most popularly known films about woods are: 1. Blair Witch. 2. The Howling. 3. Friday the 13th. 4. Wrong Turn. 5. The Evil Dead. But, there’s a wide variety in the genre that didn’t get attention, but are worth digging up. If you liked any of those listed above, these might satisfy your need for woodland horror. Listed in order of favorites using my adjectives as always.

1. The Final Terror: stalking, green/lush, “Predator”-feel. This one was made in the 80s with a some well-known stars in it like Adrian Zmed and Rachel Ward and a famous model—what the heck was her name? Anyways, the characters really make this film more than the plot. They’re a good mix with good chemistry. It preys on everyone’s fear of being vulnerable in the woods and the mentality of locals like “Wrong Turn” that can make your stay very frightening. This is one of my fav’s to put on when I just want to go deep into the woods and get lost (that is, without the stalker).
2. Blood and Chocolate: sexy, wolves, Eastern Europe, kicking soundtrack. I love this movie, it’s one of my favorite werewolf ones (along with the original “The Howling”). It’s sexy, beautiful, interesting, well acted, and the werewolf aspect is one of the coolest ones I’ve ever seen in a movie. I just adore this cult favorite. You feel like you’ve traveled when you’re done with it.
3. The Fear: psychological, suspenseful, creepy. It has an interesting premise but what really gets me about this one is the wooden mannequin. They could do a whole movie of this thing sitting around in your house and shocking you by showing up in the wrong place and I’d be creeped out. The psychological aspects of the film are interesting. It isn’t super cohesive, but it’s definitely creepy. I loved the Santa Village the best. That would be one of my top fav places to go alone in the dark!
4. Cabin Fever: psychological, gross, plausible. I thought this one did a good job of giving you a zombie-like situation that was creepy and seemed plausible. It was more about what happens with society breaks down and there is no law and only fear provoking people to do things they would never do in a “civilized” world. It’s like being alone with your darkest thoughts.
5. Just Before Dawn: vulnerable, creepy, scary woods. This one is pretty much your typical being-stalked-in-the-woods film, but it is very picturesque and you feel like you actually camped with these folks. It has a twist ending and some great chase scenes. I always like a hero who can think on his/her feet.