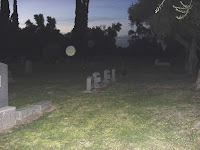 I'll try to do columns for different cities and what I've found there, as well as a column on day trips. Later today I'll probably do a column on a daytrip to Mayer.

Mesa, Arizona is the most haunted portion of the Valley of the Sun by my estimation. If you stop in the middle of the growing confusion and crowding, you can slow time down just enough to feel something heavy, something watching, something humming at a strange frequency--not with sound, but with vibrations that ripple through your body.

My conjecture on the matter is that Mesa is haunted by the extensive HoHoKam canal system that ran through it in ancient days by a culture who vanished mysteriously. Living in the desert and waterways being the difference between life and death, surely springs were spiritual centers as well as practicalities. No one knew how to manage their water like the HoHoKam. For a good map of where the canals ran in the olden days (portrayed in the pale blue lines on the map) go to here.

Strangely, when you look at the top 10 most haunted places in America compared to water and railroad tracks, they all fall close to both. The question is, were railroad tracks merely bringing bodies over the same piece of land, therefore haunting it with memories, or were train tracks found in more populated areas thus being more likely they were close to centers of tragedy and human trials, or is there something in steel that conducts spiritual energy? We don't have answers to that, but keep your eye on the combination of canals and train tracks in relation to haunted areas, as well as water and springs and granite and quartz.

If you're hungry and want to get atmosphere in an historic and supposedly haunted building, I'd suggest the Landmark Restaurant in Mesa at 809 W. Main St. (east of Alma School near Extension and Main). This building used to be a Mormon Church, originally seated in the area of the main dining room. It was expanded on in 1939. The church moved to a bigger site in the 1950s. It then became Mesa Community College. It also housed another restaurant. Eventually, it became the Landmark and has remained so for a long time.

For ghosts, here's a simple film on YouTube about it: http://www.youtube.com/watch?v=xK7c_OvhYj8

Admittedly, we had the place to ourselves after hours and one of the biggest comments by investigators were the sounds in the kitchen of pots moving, banging, low voices speaking. There are reports of the faucet turning on the women's bathroom, as well as many other random acts around the building. Personally, the main dining area upstairs had a very strange feel to it and it was almost as if you could see the church of long ago superimposed upon it. It had a very definite uneasiness and I had a sense of a young woman studying the world outside the central windows and daydreaming. The floor also pitches a bit from where the hostess station is down into the dining room, thus making waiters trip a lot and giving more stories about ghosts messing with them. The stairs to the bottom level have a very weird feel that everyone picked up on. The bathroom didn't have any particular feel to it that night, but the long hall and rooms downstairs have a tense feel, although when you're dealing with basement levels, it can be just the feeling of earth around you. I think it's definitely worth a try. This place has a neat feel to it you don't run into in The Valley very often and the food is very good.

City of Mesa Cemetery is my favorite moody Valley cemetery. It's beautiful and green and has a ridiculous amount of Cypress trees. Neighbors use it as a thru-way but also jog and walk dogs and push strollers through it, so it's a very intriguing spot. There are parts of the cemetery that seem a bit uneasy and I have gotten a few strange unexplained photographic findings. The place doesn't work for EVP (too many airplanes overhead). They also tend to close the gates at sunset and they have someone patrolling it, so it's not a good after dark place. My suggestion would be to arrive near sunset and park near the gate so they see your car. The place gets dark on its own just from the huge trees. They're very polite about escorting you when they're closing the gates there. There's a section in the northern part of the cemetery that houses all the babies and that's a very unsettling spot. Not far from that in the NW section we found an entire family wiped out on the same day--house fire?

Other mentionables: Williams Air Force Base site has supposedly heard voices. The officer's club and VA Hospital are supposedly haunted. Jefferson Park at 306 S. Jefferson Ave. (on Jefferson 2 blocks west of Power). A woman who was raped and killed there supposedly walks from tree to tree. Not a lot of Mesa residents will readily admit their issues in their private homes regarding activity, but this area seems to be particularly disturbed. Perhaps its the Mormon population that keeps a lot of folks from talking about it or dealing with it, but nearly all the older buildings in the downtown historic area have a very strong powerful feel to them. I'd say the epicenter of activity there is somewhere around Broadway and Country Club and spreads out in consecutive rings from there. Oddly, that epicenter also correlates with the historic HoHoKam site that is closed off behind the hospital.

Give Mesa a try and most definitely keep in mind that HoHoKam canal map and note if those areas where they converge to spread out are more strange feeling. I bet you feel it too. I personally like the feel, kind of like that weird good/bad feeling you'd have visiting an elderly grandmother with a dusty house. You know there's love there, but you also don't like the smell and feel and old stuff everywhere looking sun bleached and crumbly, and her voice is kind of deep so it startles you, but at the same time she hugs you so sweetly that you forget you were unsettled.