The Ghostly Legends of Aspen Grove: The General’s Conversation 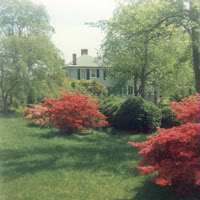 I was never scared or threatened by the haunting at Aspen Grove. In fact, as a child I determined that the ghosts of soldiers missing their families had just attached to my large family and were walking the halls at night to guard us. There was, however, one haunting feature that so disturbed me that if I were home alone, I’d stay outside on the swing set.

My parents’ master suite was an original part of the house. The largest upstairs room. Of course, used by the most important people living there. I like to think that included the troops who had set up shop in the house during the Civil War and were performing surgery on its floors. It’s the only explanation for what happened in that room even a hundred plus years later.

We had three huge Waterford crystal chandeliers downstairs in the house; one in the music room, one in the dining room; and one in the living room. They were multi-tiered and tinkled beautifully if someone were walking upstairs in one of the bedrooms. My mother could tell how good a sleepover party was by how loudly the chandeliers tinkled. We’d get an abrupt holler up the long stairs to “act like ladies.” (Mother always prided herself in good Southern comportment).

Occasionally, and the activating event is still unclear (part of why I research ghost occurrences), the chandelier in the living room would tinkle. Directly upstairs was the master suite. The only problem was, no one else was home or if they were they were in the room with you and you were both staring at the ceiling.

Soon after the telltale tinkling, sounds would begin. First, a scraping like a chair being pulled out from its place at a table. This occurred directly in front of the fireplace in the master suite that mirrored the location of the living room’s fireplace as well, since they shared the same central chimney. Heavy booted feet would pace back and forth around what seemed like a circle. Another scraping chair being drawn sound, perhaps a fist hitting a table. All of this was very muffled as if it had been run through something like seeing a Doris Day film with cheesecloth over the lens.

The voices would start up. Low and murmuring, occasionally one or two what sounded like words would rise up in tone, but still the volume remained so low it was more like muttering. Different voices would sound, two or three of them.

A discussion was being held around a table.

Not one of us who witnessed this phenomenon attested to any other explanation. We all came to the same conclusion simultaneously. A group of soldiers around a table, planning, discussing, sometimes disagreeing, pacing the floor, making their point with a fist to the table…

I heard it only a few times as a kid, others in the family heard it quite often. I’m sure my mother had it the worst because she was a stay-at-home mom and didn’t drive, so she was housebound most of the time. Mother, however, had an endearing Southern way of handling things like ghosts, she was a romantic and the notion that someone else loved the estate as much as she did, warmed her heart. Being great at making sweet tea and welcoming folks, she’d accept them like a grizzly old father-in-law how moved in and upset your world, but you had to love him for being cantankerous because he’d earned it. To mom, these soldiers definitely earned their prankster behavior and she wouldn’t deny them of one second of it.

The last time I heard the voices was the last night I slept in the house. Everyone was gone, except my sister who slept inside. I slept in a cot in the “thicket” area of the property with my best friend as a kind of “last sleepover.” We had seen lots of shadowy figures going in and out of the thicket over the years and we wanted one last ghostly encounter. (this is probably where I got the notion to write my present manuscript "The Thicket") What we got instead was my sister waking us at midnight to come up to the house. The “men upstairs” were carrying on and she couldn’t sleep. We didn’t think we’d sleep either. You can be a lot braver about the voices when the house is filled with people than when you’re alone with it. We had so much stuff acting up as we packed to move that we fully expected the ghosts to be truly troubled that night. We curled up on the sofa in the living room, our eyes towards the ceiling, studying the chandelier in the bits of light that made it into the room.

The tinkling started an hour later when I was almost nodding off. The voices and scraping and footsteps and knocking began. This time, however, I wondered to myself why a ghost would reenact something over and over in the same fashion. There weren’t terms and concepts like residual hauntings out in the world of paranormal research being bantered around in the newspapers, but I came to a conclusion myself that the house simply remembered something, like a scar. It left a mark of an event and when conditions were right, it replayed that event.

I fell asleep as soon as the sounds and voices muted, but I felt strangely sad as I realized I’d never hear this occurrence again. The funny thing about ghost hunting is that you get attached to your ghosts.