Getting Your Head in The Right Place to Hunt Ghosts 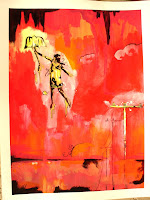 (This art is one of my son's pieces)

I am a huge advocate of rational emotive methods (see works of people like Albert Ellis and David Burns). I incorporate these into my work as a ghost hunter and as a human being so I can enjoy a healthier more productive life. It allows me to interpret things accurately and believe in my abilities to cope so that whatever comes my way, I’m confident about my ability to cope. Here’s an example of how getting your head in the right place can give you a very different reaction to an event than someone who lets their mind take over without interruption.

My best friend and I did lots of “girl getaway” wild and crazy things together, so I figured that since I was the queen of Halloween, I’d take her to a huge haunted house event. You know, one of those ones that takes 45 minutes to get through and lots of screams. I thought, since we’d gotten into lost of mischief in the past, this would be another fun and silly event for us to laugh about in the future. What I didn’t realize was how much our explanatory styles varied so that what would be a fantastic event for me left her nearly posttraumatically stressed.

It began in the line where I joked about the costumed giants messing with us while she cowered behind me. It was a side of the ruthless businesswoman I’d never seen. I joked near the front of the line that it would be lame to go with another couple since they were doubling up people into groups of four to send them in. I said, “that’s for wimps. I want us to go alone.” The guy at the gate gave us that wish. He laughed at me like I were insane and sent the two of us in alone. My friend immediately grabbed my arm and wouldn’t let go.

The first step was into a completely blackened room. We couldn’t see a thing, had to feel the walls to find our way through the maze. She tugged at my belt loop and cowered, shivering, wanting to leave immediately. I’m sure that upon entering that room her thoughts must have gone something like this, “we can’t do this alone. What if someone’s in here? What if I touch them? What if we never have lights the whole time? What if someone touches me?” Of course, without following up those “what if” questions with options in her own mind, she was setting herself up for fear. Fear takes place when you feel you can’t handle the situation that’s upon you. How does that saying go…“there can be no bravery if there is no fear?” I guess for me that meant I wasn’t necessarily brave because I wasn’t scared. My thoughts were going like this, “I can’t wait to see what’s next. I hope the costumes are scary. We’ll get through this room and the great stuff’ll start.” I was, of course, excited by that internal dialogue.

By the time we entered a lit area that had bars and a prisoner locked behind it reaching for us, I turned to my friend and said, “Don’t worry. They aren’t allowed to touch you. Every time we get to the end of a passage, they’ll be to the side, ready to come out and follow us or leap out. Be prepared.” With this knowledge, she was able to let go of my hand. In fact, although the 45-minute cruise through the haunted house was definitely creepy, neither of us were genuinely scared. Knowing the rules and what to expect had deflated the fear. It’s kind of like telling a kid what exactly happens at the dentist. If you sent him without any knowledge, everything would be unexpected.

Explanatory style is critical in ghost hunting. Although people don’t usually enter the trade afraid of the hunt, it’s not surprising that they soon find out they are frightened when it had sounded so glamorous when they saw it on “Ghost Hunters.” What they don’t see on “Ghost Hunters” show is that they have nightvision on the cameras seeing the people. These hunters don’t see each other. They’re in the dark.

You need to review with yourself ahead of time. Can I handle broken down buildings? Indigents? Spiders? Rats? Raw sewage? Complete and utter darkness and silence? Being alone? Hearing something I can’t explain? Seeing something I can’t explain? If you get yourself ready ahead of time, the hunt will be very productive because instead of feeling heart pounding and sitting there huffing and puffing, you’ll give chase. Remember that Ft. Miflin episode with Grant in the narrow passage and his light hits a face in the opening. He jumps, but then he rushes after it right away. He’s allowed to react, but he doesn’t let that hold him back from pursuit. That’s where you have to be in your head. You don’t let your imagination run with you and take over the show. If you hear a sound and you immediately think it’s a ghost, you probably need either more experience or more time getting your head in place.

Here’s the rules I run through my head in any ghost hunting situation:
1. Nothing can hurt me, possess me, or follow me home. (I know there’s a lot of ghost hunters out there who would dispute that, but I can’t speak for their way of approaching ghostly phenomenon, I can only speak for mine).
2. When something happens, I want to be ready with recorder/camera/meters to document it. I am waiting for it to present itself for me to get proof. I’m in control here. This is my show. The spirits, if I’m lucky, will cooperate with my interview. It’s sort of like documenting baby’s first steps. I’m proud, thrilled, and anxiously awaiting those first tries.
3. If something exists on “the other side,” then it’s equally thrilled to be seen or heard finally. I would hope my efforts from the other side would be greeted with excitement and interaction rather than fear and flight. That someone would try to converse with me, comfort me, recognize I exist.

Here’s a key a lot of people don’t know:

When you take four people driving down the road and getting a flat tire, you can get four different emotions: A. In a rush to get to work, the driver snarls, “just great!” now he’s angry. B. Driving down an unfamiliar road, the driver says, “this is not a good part of town,” and this driver feels fear. C. The driver just passed driver’s ed and learned how to change a tire and says, “I get to try it out for real” and feels very proud and independent. D. The driver shrugs and says, “it was bound to happen after driving for 18 years,” and gets out to change the tire with a very practical and non-emotional reaction.

There are few times when you are more faced with your crazy interpretational styles and inner dialogue as when you’re sitting in dark silent place awaiting the unknown to happen for hours on end. Learn to have a good internal relationship with yourself and a healthy explanatory style. Put all your fears on the witness stand and cross-examine them to find them not true. Once you start feeding your brain the right diet, it begins to clean up its act. Insecurities, fears, anxieties begin to melt away, replaced by healthier emotions like pride, ambition, and independence.

Once you have your head in the right place, the hunt will be a successful one. Even if your location didn’t end up having evidence, you just met yourself in a very challenging place, eager, ready, and willing, and you can walk away knowing you can truly handle anything else that comes at you in life.

After all, ghost hunting is just a metaphor for life