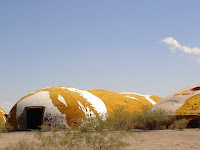 Local legends are always fun. This one is very scary.

In Casa Grande (just northwest of I-10 meeting I-8, south on Thornton Rd which is a washboard dirt road) there's a place called "The Domes." This conglomeration of weird shaped buildings was originally built as a factory that never opened. What's left is a bunch of very long and Kiva-shaped buildings that are open to the elements.

Well, you just know that I had to find out about it. I went with the leader of MVD Ghostchasers, Debe Branning, on a little road trip to document Adamsville Cemetery on the 33rd parallel. We were not far from The Domes, so we thought we'd investigate. The road down there is very very bumpy washboard dirt road. When you get to it, there's some barbed wire to contend with.

We were brave (or should I say stupid) enough to investigate further. We wondered if this might be a good place to bring the group to investigate at nighttime.

Oh boy, were were naive.

Admittedly, this was a good case of debunking. We walked onto the property, taking pictures of the crazy buildings--just look at it, it's very other worldly... I was anxious to get inside and do some EVP work in the daytime. Thankfully we went in the daytime.

I walked up to a long building and went to the open end of it (sort of like a plane hanger). I'm cruising along, taking shots and looking around. My eyes adjust to the darkness and I hear a voice very clearly talking. I stop and my eyes widen. Debe is in the distance taking shots and didn't hear it. I wonder if I imagined it, but it sounded so clear. Then, I hear footsteps inside, echoing off the walls.

Hey, maybe this place is haunted.

I step into the opening and look down the length of the crescent-shaped building to find a lot of stuff. A refrigerator, a dresser, a mattress, a lot of clothing...

I see a movement and realize there's someone at the far end and I have no idea if this guy is going to fight for his right to squat, so I take off, waving Debe to get the hell out of there. I can hear someone yelling and I know I've pissed this guy off.

Sorry, dude. Didn't know it was you haunting the place!

We picked up the pace, crossed the fencing, and climbed into the car, praying we don't have a flat tire. From the sounds of footsteps and voices, there were at least two or three of them in that building alone. I don't even want to know about the other buildings.

It's a regular commune.

Well, this is the problem with fascinating abandoned buildings, residence might be taken by ghosts, but almost surely by man. I wouldn't advise a trip to The Domes unless you want to stand back and take pictures.

It's definitely one of Arizona's weird and freaky spots.