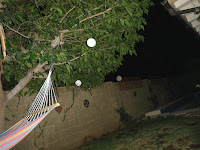 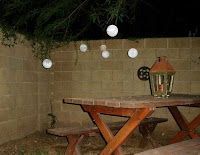 Around Halloween, you'll hear a lot more from me about crafts, but this is a fun theme for the backyard that I just had to share. I made these years ago as a nod to my ghost hunting hobby. They're fake orbs that dangle from a tree.

I went to Michaels (you could also go to JoAnn or other craft store)and got the supplies. I took the styrofoam balls and tied a long piece of fishing line to a florist's pin and stuck it into the ball. I then hung it from the tree and while it was hanging, I went around it with spray paint that makes a pale gray stone effect on the surface. I hung several from the tree. At night they float eerily. It's really a fun effect. You could even do glow-in-the-dark paint or plaster them if you want more texture.

What was really intriguing about this was that as soon as I hung them up, I started getting what I call "the poser." An orb that hangs out with the fake orbs. No kidding. I know orbs are dust and such, but this is just so weird that every single time I took a shot, the poser was there and no where else in the yard. When I took the orbs down after a couple years when the tree came down, I got no more orbs in that corner of the yard. In the first shot, the orb poser is to the far right aboe the wall. In the second shot, he's right above another orb. He's so close to the fakes, it's almost hard to tell.