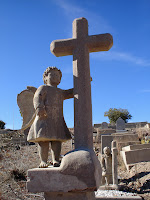 I love this place. I love the drive there down the 60, weaving in and out of hillsides filled with boulders. It’s just a beautiful and surprisingly fast drive. If you stop in Miami along the way, it’s a very abandoned feeling town with tons of bizarre antique shops. They were in the middle or renovating the town when the recession hit. It’s left it with an eerie feel. For a time there, money-burning yuppies were rushing there to buy second homes away from The Valley (apparently, Queen Creek and Maricopa weren't far enough away). It has a feel that’s so unsettling that I’m both repelled and attracted to it. You'll really want to see the shops here, take at least an hour stop here just to see. They have shops that sell some of the strangest stuff I've found while antiquing.

Continue on to Globe which is very near. I saw my first and only full-body apparition in the top floor of the Gila County Jail which is abandoned and has become a museum and place for tours. (see sketch above--drew that up fast and furious that night--sorry, haven't drawn faces in years, but I can still picture him years later. I picked up that he was a worker, cleaning floors there and very simple minded. Died of the flu, I believe.). The walk along the catwalk from the jail to the courthouse is a frightening one. It is a tour well worth taking. It’s open Monday to Friday 9-noon. For pictures and descriptions of our team’s investigation there, check it out at: http://www.mvdghostchasers.com/2006%20workshops/GLOBE/globe_2006.htm

The town itself has amazing antique shops and a unique mix of folks. It’s as if someone forgot this part of AZ and tucked it away. I love the old time feel of it and it’s not one of those dusty feeling western towns. It has a lot of charm. Each building has a history lesson inside. The antique shop owners enjoy talking about the history and the ghosts.

The cemetery is worth a check too. I’ve never seen one in the west quite like this one. It’s on a hillside, divided into huge sections that take forever to ramble around. There’s a few cypress trees and some areas that appear well kept and neat, but much of it is the forgotten masses, some outlaws, and some rangers. It’s very unsettling and I don’t know if that’s because of the geology of the spot, but you will definitely get a strange feeling of being watched. It’s a great photo op too because the headstones and statuary are intriguing. Some of the headstones are rigged with old wood, crumbling concrete, sometimes just a big rock.

If you want a day in the old west, this’ll do it for you. There is a lot to see there and if you decide to stay the night, consider the Noftsger Hill Inn. It was the old elementary school and apparently has ghostly activity. Perhaps it’s the mining geology of this place that, like Bisbee, it feels very unsettling, like sitting on top of an active volcano.
http://www.bedandbreakfast.com/arizona-globe-noftsger-hill-inn.html

I highly suggest this one for a day trip for Phoenix folks. It’s a very fast drive beautiful drive, not like the usual flat nasty desert to Tucson. And, if you haven’t seen the movie “The Hills Have Eyes” the trip will seem quite sweet, but if you have, it will seem quite exhilarating. Be sure your car is in good order. Wa-ha-ha (my best Count Dracula sound).