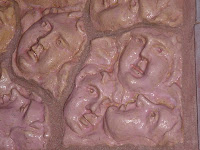 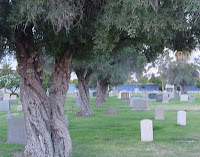 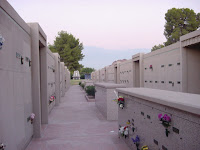 I thought I'd cover some of the Arizona cemeteries, since going to them and photographing them is a hobby of mine, as well as looking for infamous tenants. Some folks like to walk the grounds of cemeteries and they become park-like such as City of Mesa's cemetery that has more exercisers and strollers than visitors. There's also cemeteries for hardcore taphophiliacs (lovers of graves) like St. Francis in Phoenix. You can reach it by taking Thomas to 48th Street and heading south towards Oak. It's on the left and broken into two huge graveyards. The furthest one is actually the better in that it has tons and tons of outdoor crematory remain crypts and all the nuns and priests are buried there. I'd say for all the AZ cemeteries, this one is probably the most crowded with residents. Foot per foot, there's more folks there than anywhere else I've seen in AZ.

What I like about St. Francis is that it has wild cats running around there. A nice local lady feeds them every evening out near the tall cremation wall and they congregate in a frenzy. The cemetery is a Catholic one and has all the bells and whistles you'd expect including creepy statues, huge headstones, and interesting offerings.

I've found this cemetery unsettling. Two reasons are that I myself heard what sounded like a man's (priest?)voice uttering in Latin when there was no one there. It was extremely clear and at the time I hid behind a wall because I didn't want to interrupt what might be a ceremony. When I heard him pause, I peeked out only to find no one there at all. No one on the entire grounds, in fact! My son and his best friend saw a shadowperson and had a fairly lengthy encounter with the startled and curious "creature" on the grounds (see my past article about shadow people). It changed his complete outlook on ghost hunting. He now understands why I seek answers. He tried everything his extremely logical mind could do to figure it out but found no answer.

I think photographically this is an amazing cemetery. It's also very peaceful and great to wander around and read the headstones. Even if you're not a cemetery person, you'll be intrigued by this place. The feel of it is exceptional.

I would advise, however, to be careful. They close the gates early whether they see your car or not and this is the cemetery where my son and I got locked in at 6 pm!