Reincarnation is Not What We Think 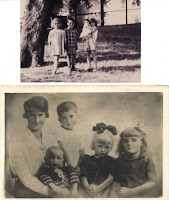 I thought I'd start off this blog with an example of lifecycles. In one picture, you have my grandmother at Ellis Island (off the boat from Norway) with my father, his two older sisters (one brunette, one blonde) and baby sister. Then, there's a picture of me as a baby with my brother and two older sisters (one brunette, one blonde). Cycles of life aren't as random as they sometimes appear. The same scenarios are played over and over again. Have you ever heard someone say "oh, you're not that unique--loads of people like what you do, choose the things you choose, have the same quirks"?

Nothing is really original in this world.

Now, onto reincarnation. I get asked about that a lot. It's a combination of having psychic abilities and being a paranormal investigator which makes people think I might have a stand on this.

Reincarnation doesn't exist. At least, not in the form we see in movies and hear from gurus. People's spirits do not somehow get reborn into new bodies to learn new skills they apparently didn't get the first time around. This isn't elementary school. We aren't getting a second go round at third grade.

That being said, I have had experience with remembering a past life. It's an extremely detailed one that came to me in my sleep for a few nights in a row. I even woke up speaking French and knowing things about the Jewish religion that I could not have known from my life experiences or education. It truly amazed for a few weeks. I even occasionally still wake up during the night speaking French and catch myself and hear my strange voice as I awaken.

Here's how I see the whole phenomenon. When I do a reading on someone, getting information from their jewelry or holding their hand or whatever means I use, I'm getting their history by some means as of yet not explained by science but does absolutely exist. That being said, their memories, their view of their life, their home they grew up in, their summer in Nantucket...they become my memories. They are as real to me as if I had lived that life. It's a very startling thing to experience and I quit reading some time ago because I was bogged down with other people's lives in my head.

The average person isn't in tune with their "psychic radar" so they don't realize the bits and pieces of info they get that way every day. When something occurs in which their radar is on and they got a blip on the screen, it's something they haven't experienced before. Had I not had a lifetime of using my skills to know that I'm opening a portal to view another's life, I would swear that I'm seeing a life that I led. I have the feelings, the physicality, the time period...all so very real in my head that I believe it was me inside that body living that life.

When a person gets a reincarnation memory, for whatever reason (science hasn't caught up to the mechanism by which we receive information), that person is getting signals from a life that was lived some time back. It's vague as to why they latched onto that life passing by at that time and read it, but upon seeing it in their head, it feels very much like their own life including all the feelings and relationships associated with it.

The details of my "past life" that came to me in a dream included things like how Jewish people handle death (my mother had just died in the dream), what was happening in the Nazi era and my father and I and our need to escape France. The details of my village, my home, the covered mirrors inside my house, the term "sitting shiva" were all baffling to me when I woke up, but I know enough from readings to realize that I was reading a life that had been through the eyes of the person.

So, when folks ask me about reincarnation, that's my stand on it--it is a psychic reading postmortem. It's a conclusion made by the knowledge that to read a life that's passed is not so very hard when everything that is and everything that has been still inhabits this dimension. It's the question of how we access it that intrigues me the most. What conditions must be present to pass by a life, feel a bit of it, taste a bit of it, see a bit of it.

Deja vu and the sense of having been to a city before when you arrive to a new place and know the way to a location without having traveled there before, can all be tacked onto the reincarnation phenomenon. The passing of a fragrance, the hint of music, the ability to know an outcome and not know why...all tied into that crazy "invisible railroad" that moves all events like the Mayans predicted...to replay over and over again, inspired by people now who are influenced by events and people who have been.