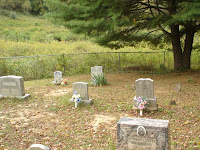 The premise is simple:

A scientist, along with a psychic medium, find the pathway by which psychic information is passed and the result is a machine that is basically a computer to the other side. With folks being able to talk to their dead ones when they pass, there is no longer any need for formal funerals. In fact, instead they have a "crossover" ceremony instead where they sit in a room with the machine awaiting their first message from the other side. With this, people don't grieve, they simply treat the dead as living across country and inaccessible, talking to them on the computer like its a telephone. Religion changes its face, as well, becoming a unified church. The government now regulates our access to the other side with rules; you must be blood related to speak to that spirit, you may not ask about the future or ask for advice or ask them what occurs on the other side. This, of course, leaves folks to only discuss the old days and update the "transitioned" family member on the mundane facts of everyday life. All conversations are monitored. Those who have committed suicide, surprisingly can show up on the machine. In order to stop mass suicides which occurred amongst the sick and elderly at the onset of the machine's introduction, the government now blocks suicided spirits from talking to loved ones, therefore reinforcing the idea that they are in purgatory. No one questions the efficacy of the machines, except for the man in charge of designing them. He has his own doubts about whether we can be guaranteed we're talking to heaven. When a virus is launched from the other side, it becomes apparent that dark forces could be accessing the living, as well as those in heaven. The scientist joins forces with a psychic to expose the system for its flaws. He is motivated by the loss of his sister to an online predator when there were no safeguards on the new technology.

There's the plot. I'd love to get input as to whether this sounds like a feasible venture to pursue. I have tentatively called it "Metanet." I've often wondered what would happen if we had reliable means to talk to the other side and my hope that some day we can simply find the "dark energy" or whatever pathway is used to send information from the other side to make a reliable tool for conversation.

I've considered just making this a screenplay instead of a novel, except I fear it will lose some of the subtle descriptions and background that will make it so compelling to read.

Thanks for your opinions in advance.