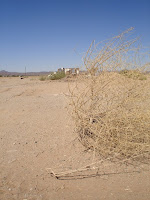 I've never really acclimated to Arizona (even though being here 32 years). I don't know what it is about the place, but it's extremely unsettling. At first, I was certain it was the unlimited sky and the lack of trees. You can see a car coming at you on the highway a half hour before it reaches you--really! I think it's the feeling of being exposed or the sun beating down on you relentlessly...

My first road trip to California, I really felt that unease at a whole new level. If you've ever seen the movie "The Hills Have Eyes," you know that director had to have made a few forays across the Sonoran Desert to understand how an entire horror movie could be based on the most basic human fear--what if I break down here???

I grew up with thick woodlands and, yeah, you do often feel like you're being watched in the woods. It feels like woodland creatures hiding and studying you, wondering if you're friend or foe. The desert, however, feels like giant eyes. Like God's eyes. Like you're nothing more than a bacteria on a glass slide and that sun beating down on you, it's really the light from the microscope...

Every road trip in the desert leaves me with the mortal fear of breaking down, of rattlesnakes, of dehydration, of sunburn, and especially of weird rednecks that would call such a place their home.

You're never as vulnerable as you are driving the stretches of the I-10 past Tucson or the 8 towards Yuma. If it weren't for the constant buzz of air force planes, you'd swear you're in a post-apocalyptic world. Nothing thrives here except the most ornery and prickly things imagineable. (Makes you understand how folks like the Earps took such a liking to it.)

Are the roadways of Arizona haunted? Oh yeah. Stop your car alongside the road some time on the way past a place like Sentinel heading towards Aqua Caliente (the scariest feeling stretch of AZ roadway, I believe). Pull over (you can because you'll run into zero cars) Turn off the car (if you dare to hope it'll start when you try the key again). Just stand there and listen and feel and look.

My riding buddy light-heartedly asked me one time on a road trip to Yuma, "who's the sentinel of Sentinel?" I jokingly responded, "maybe we should stop and knock on every door and ask." We turned off into the Sentinel exit and there was one house and an empty purple building. We opted not to knock, but to continue west on the road towards Aqua Caliente (always in search of a new graveyard to see).

It was on that roadway that I decided what the sentinel of Sentinel was... the desert. It's watching you. It's summing you up like potential prey.

As we thankfully finished visiting the farm-workers graveyard, we turned to go back without mishap until we sited a beautiful vulture sitting on a dead tree studying the desert as if it owned the place. I had her pull over so I could take a picture and then it dawned on me (as the bird was completely unintimidated by us) that this is the sentinel of Sentinel and he commands the desert to do his bidding.

I won't be back on that road trip again any time soon. Somehow, I feel like I tested fate there more than on an ghost hunt. That is definitely the most scared I've been in the daylight. It's hard to explain to folks who haven't seen the desert, but it's something everyone should have to experience and the reason why only the hardest survived here.