Headed for Hades or Redemption? 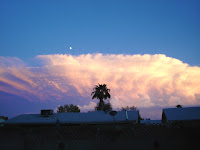 Going off track from my usual ghost hunting observations, I'd like to discuss personal explanatory style. As a ghost hunter, counseling and helping people reframe things often gives them great relief. I can reveal this to you by discussing present times.

It does appear to most that we are reaching the end-of-world times, but it's sort of a glass half full or half empty observation for most.

I remember one day not long ago I was checking out at Target store and the older gentlemen ringing me up said something about a child acting up nearby and commented. "It certainly isn't like the old days anymore." I said, "Thank goodness," automatically and he looked at me strangely and then scowled. "What do you mean? In the old days a parent would have walloped a kid for that behavior." I looked him square in the eye and said, "you mean the old days when Blacks rode in the back of the bus and there was no cure for infections like TB? Those old days?" That shut him up, but I realized that people can explain the world in vastly different ways.

What's going on right now in the world seems to many to be absolute chaos. My parents grew up in the Depression era and were both in the military in WWII. They saw the invention of the bomb and the start of the Cold War. They raised teens in the 60s. They had some of the worst conditions to grow up in and yet they were the greatest contributors to our society that I know of.

Before 9-1-1 would you have seen a New Yorker standing on the street trying to feed workers as they dug through rubble? How about all the flag stickers on the back of cars and folks proud to be Americans when they took it for granted prior to that time. What about the global warming and high costs of gasoline finally making us have to face alternative fuel issues? Remember the government having no water for Katrina survivors but their neighbors taking in entire families to help them out and then working to rebuild their houses for them?

Things have to get worse before they get better. I am thankful for this time period that has helped us to quit taking everything for granted from fuel to credit card charges to creatures like polar bears. We went from the "me" of the 80s to the "us of the millenium.

Yeah, it's gonna hurt, but the only way to nirvana is to make the hard decisions, the hard sacrifices, and the knowledge that what you do has effects on future generations.

It's all in your explanatory style. You can blame "them" or you can blame "us." If you blame "them" there's nothing you can do but go to war. If you blame us, there's nothing you can do but change. If you think these things occurring are signs of threat to your personal security, you feel a sense of scarcity and that results in anger and fear. If you see these things occurring as possibilities for change, you experience the emotion of hope.

I'm extremely thankful for Obama. I don't know how much he can do with the restraints of our absurdly convoluted and selfish Congress, but I have hopes that if nothing comes from his tenure but the message that we are personally responsible and to quit kicking and screaming and roll up our sleeves, then I think he's going to be immortalized for reminding us what America was supposed to be in the first place. Hope, change, no more status quo, and the example for the rest of the world of the possibilities if you eliminate the fear.

That said, I go on record as having a positive explanatory style.