Ghost Hunters Use Their Senses (All Six of Them) 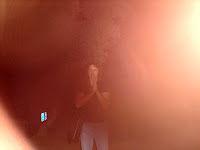 Don't let the photo above fool you. The person taking the shot was an amateur and didn't know how to use my digital camera when I had removed the strap so I'd get no false positives. His finger ended up waving in front of the lense as he took the shot (what you get with a ham-fisted football player and a tiny camera).

I'll use "Ghost Hunters" show team, TAPS, as my example to explain why our senses cannot beat any equipment. Sure, everything we process goes through the brain and all our perceptions and explanatory style so that it's no longer objective, but that's what the instruments are for, to hopefully take note of what our own computer-containing heads already discerned.

TAPS as seen on their weekly SciFi show does one of the most basic necessitities of ghost hunting. They go into the room, lights out, and sit with the ambient sounds, ambient lighting, and ambient temperature. They deal with road traffic, outside lights, and refrigerators turning on. They learn the feel and the smell and the sound of the place they're evaluating. To us, the viewers, they seem to have ample light. We, of course, are seeing them with infrared camera assistance so that we can see them in what to them can be complete dark or near darkness. It may surprise you then to hear them say, "did you just see that move in the corner?" Well, even your house probably isn't completely dark at night. You can tell degrees of darkness and light.

Of course in the dark, visual perception can be askew. Some of us have poor night vision. Some of us are prone to middle-aged eyes which tend to get black moving blotches out of the corner of our peripheral vision when there's inadequate lighting. Then, there's the perception that you often hear TAPS comment on, "something just moved in front of that window and blocked out the light." The problem with that is that it doesn't necessarily mean something is inside the room, it could just as well be outside the window passing by, cutting out the outdoor light from their view. Keeping in mind that your vision has to adjust to darkness and any presence of light can capture something moving in front of it quite obviously, your vision is a trusted tool in your arsenal.

Auditory phenomenon is probably even more often reported than visual. Homes make sounds. Devices make sounds. Wood floors make sounds. Pipes make sounds. Even unaccounted for hunters can be the source of mysterious sounds. While I appreciate rapping sounds on ghost hunts, I'd want there to be an absolute three to four question reply without too much length between question and rapping. If they don't answer some questions, or they quit rapping back and then come back later, I'd say it's too intermittent to count. But, if you ask this presence three or four questions and get prompt replies, that is impressive and I'd really hope you had your voice recorders rolling. Footfalls are probably the very most reported sound, other than doors creaking and whispering voices. I've lived in a house with over 100-year-old wood floors and they certainly make sounds without provocation. What they shouldn't do, however, is make the very clear sound of boots hitting, heel first and then toe in a regular rhythmic walking pattern. You hear that, and you know you have a residual. It's as if the sound itself was recorded by the house to be played back later. I've heard those footfalls in a home where the new owners put in carpet over the wood floors. That'll impress you. You have to be careful though to learn the sounds of the place you're studying. You need to open doors, cabinets, turn on sinks, wiggle pipes, turn on the air-conditioner to hear its startup, and listen at vents for the sound of voices carried from outside. I'd say you're almost always likely to get sounds in a place, very likely to get visual, so keep your ears open and force the environment to be pure with as few people as possible in the room and if they're there, keep them all in one room. No shuffling. No coughing. No small talk.

I admit I only had the sense of taste come into play one time in a jail. I got a metallic taste in my mouth all at once that was overpowering and then completely disappeared after four or five seconds. It was kind of an odd thing, but it was accompanied thereafter by a gunpowder smell. It was intriguing. I think of our other senses; taste, smell, and touch, you'll find touch is most often activated. Smell does occur but buildings can hold everything from urine to cigar smoke to fragrances for a very long time. I once had a favorite coffee-scented candle and it left a smell in the wall of coffee. Even a few years after I got rid of the candle, if I passed by the wall on a warm humid day--boom! I'm smelling coffee quite clearly. I don't rely on scents at all, even if they engulf you all at once. I've had way too many explanable phantom scents occur and they can be on the most gentle stream of air. Touch, however, is very helpful. This is mainly felt as temperature and barometric changes. When the head feels like its squeezing, it's feels tight to breathe, the air takes on a sudden plummeting chill...

Don't confuse your sense of touch with your sixth sense, however. The sixth sense in an investigation comes in the way of hairs standing on end, a feeling of cold electricity running through one side of your body and out the other, the sense of being watched, and a feeling of impending doom. That's a very critical sense in a ghost hunt. Pull out your instruments, get out your recorder and your camera. This is the time things are cooking.

If I had to say which sense is the most accurate in a ghost hunt, I'll put it on the line and say that the only really good barometer of ghostly activity is your sixth sense. Any time I've smelled a scent or heard a sound, the meters and cameras and recorders aren't likely to get a thing. The time I feel something rush through my body and take my breath away, I get actual recordable data.

You're human and you have to go into the hunt with your senses, but don't ever discount the one sense that'll tell you in the most primitive way that something's there...your sixth sense.