Getting In Trouble on the Hunt 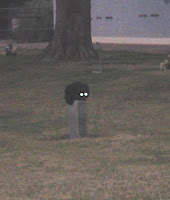 This photo was taken on a very auspicious night. The night I got my son and myself locked into a cemetery.

We went to this particular cemetery before twilight and walked around, cataloging it on our camcorder. I had experienced a voice speaking in Latin in this Catholic Cemetery and realized I had to come back and see if it would happen again. At the time it occurred, there wasn't a soul in sight.

The caretaker came and didn't see my bright red car in the driveway and proceeded to lock all the gates. We found one locked while it was still light (they may say they close at sundown, but to them sundown is 5 pm year-round). I was a bit frantic at first. The cemetery was in a bad neighborhood near the airport and there was no one in sight who could possibly let us out. We climbed into the car and searched the grounds to find every gate locked.

This was pre-cell-phone era for us. We hadn't given in yet to the lure. This night would change that decision.

We climbed the fencing leaving my equipment in the trunk of the car and walked briskly through a neighborhood that knew we didn't belong there. We were followed by several unsavory characters until we found a Circle K. We were in luck to find a family member who could come and get us and take us home.

That Christmas, my father-in-law got me a cell phone as a gift. A subtle hint, no doubt. I ended up giving it to my son. I hate the idea people can contact me anywhere and anytime. That's what answering machines are for. But, I also know as a ghost hunter, you need to have a cell phone for safety, so I bring a trusted friend with a cell phone in her possession. (I'm quirky, but not stupid).

Oh, the fun didn't end there. From that experience (like all good ghost hunters accruing knowledge), I thereafter either parked in the gate so they couldn't close it, or outside the gate so I could climb over and get out. I know you shouldn't be in cemeteries after dark, but I love to go when the sun is dying so I can use the flash. Most cemeteries are very cool about that, some don't have attendants. You need to be ready because you can get in trouble for wandering the grounds after hours. I usually show them my camera, explain I do art and wanted some dim shots with the flash for reference. They look at a middle-aged woman and don't feel I have a trunk full of candles and a sacrificial chicken, so they let me go.

Another time, my ghost hunting partner and I were in a beautiful picturesque cemetery after dark. I left my voice recorder at a headstone where a lot of stuff was showing up on the camera. We ran into a ranger who told us the place was closed. I wasn't going to leave a $100 recorder, so I said, "my friend's cousin is buried there--where the balloons are, I'd like to get a picture of it for her." The ranger let me go and my friend and I walked away into the darkness towards the Mylar-balloon lit grave and she proceeded to take some shots while I raced across the cemetery in the pitch dark and got the recorder. I was breathless, but in time for the ranger to come over to see what was taking us. She looked at the decorated grave and said how sad it was to lose someone so young. I felt a blush of guilt, but not the kind I might have felt if I had to tell the ranger we were ghost hunters and left a voice recorder near a grave. I'd probably be banned from the place.

It's not always going to be easy ghost hunting. Every time you learn to debunk something, you become better at your skill. Every time you screw up on a hunt, you learn practical things, like backup batteries, maps, cell phones, and weapons. Yes, weapons. Abandoned sites are not always as they seem and the ghosts aren't going to hurt you, but the dude trying to get some zzz's might.