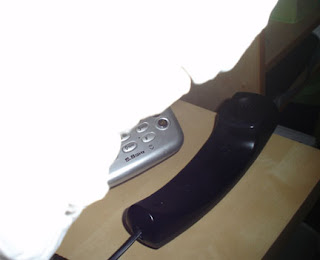 I work from home, so my days are fairly quiet, except for the sound of doctor's dictations that I'm typing up. One day, while sitting in my office, I heard a woman's voice suddenly very clearly, very loudly, as if she were in the nearby living room at the other end of the hallway. She spoke several sentences. Although I did not capture any words because I was too startled to comprehend, I did catch something at the end about "coming around again."

Of course, like any homeowner, I know the sounds of my house. This was not a sound I had ever heard here and it was so ridiculously "real" that it had to be. But, how could it be? I checked the windows, walked around, waited. Looked at the clock as if it might provide information. Finally, I gave up and went back to my office to work again.

I'm a skeptical person by nature and when something is that clear, I doubt seriously it's a "ghost," however, it left me feeling a bit unsettled. There was no TV or radio on. I wasn't using my pedal for my dictations on my computer. After a few minutes, I got up and wandered into my son's room to see if he'd left something on his computer. It wasn't turned on.

Good sleuthing so far. I looked for environmental factors like TVs, computers, radios, and open windows. Still, I was left with phenomenon. It's always phenomenon when it hasn't been explained yet, but it isn't always ghosts when it's phenomenon.

So, I tried to go back to editing the report. Still, my mind loves a good mystery. I thought about the way it sounded. Did it sound like someone in the next room? Quite clearly it did, but it also had a strange tinny sound to it. In fact, it was almost identical to the sound in my answering machine. If I don't answer the phone and hear someone leaving a message, that is precisely the quality of their voice.

I sighed with relief. This was definitely the answer!

I stopped before the answering machine and studied it. The light wasn't blinking. In fact, I never heard the phone and the phone is on my desk. It reported zero messages. I figured, maybe it's stupid, so I tried to play it. No messages. But, I know it was that sound...

I went back to work for a third time and gave in. Then, on the hour it happened again. Same lady voice, same amount of talking, and something at the end about "I'm leaving now." Wow, sounds pretty supernatural if you think about it. I rushed into the next room, certain the light would be blinking on the machine. It wasn't.

But, there was a part of me no matter how much I couldn't explain it that felt really and truly the voice came from the machine. If I were a more gullible person, I might consider ghosts are talking to me through my answering machine (so inconvenient they didn't leave a message!)

Hubby got home from work. It helps when you're a ghost hunter to be married to an engineer who specializes in sound issues and testing equipment and all kinds of gadgetry and who lives on a "all there is is on this plane" kind of mentality. I sat him down and asked if I was going crazy because I think my answering machine was very clearly talking to me.

He thought about it a moment, went to the machine, turned to me and said, "you're not crazy. You did hear a voice coming out of it." He proceded to tell me that, even though the phone did not ring, the machine did not record, the voice was able to come over it because it's a receiver. A woman driving down the street with a cell phone could potentially "bleed" (my own take on the explanation) through our machine and be heard.

Wow. That not only was a relief to learn, but it made me begin to skeptical about all kinds of ghost hunting gadgets. After all, we use digital recorders all the time which are receivers. He proceded to ruin my world with talk of there being no way to verify if something at the right frequency didn't crossover onto our recording devices. There is no real controlled way to handle it, except in a controlled laboratory environment.

Not the words you want to hear, but in the long run it helps me. I realize that as long as I'm in earshot of any such devices, I have to wonder about what's coming across my recordings. I can feel pretty confident in a shack in the middle of the desert if I get an EVP, but what can I trust in a house in the city?

It's definitely something worth pursuing further. I'm about to begin my education on transmitting and receiving. I hope to do an update when I learn more. I want anything I get in the field to be reliable.

Most of all, I'm just glad that I am logic-minded and sought answers. I could have gone the rest of my life thinking a ghost talked to me in my house one day. I might have run around with divining rods and a ouija board hoping to bring her back again when it was probably a pushy real estate lady on her way to lunch.

What I'm saying is, listen to your gut. If it sounds real, it probably is real. There's no way a ghost is going to get such a great speaking voice and say so many sentences so clearly twice in one hour. So, look for the cause.

I'll keep on debunking and hope to tell you more about other de-bunks I've done in the past and am doing in the present so you can learn along with me.