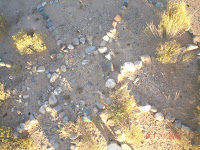 Just when you think your state might not be all that active for the paranormal, all it takes is a bit of digging and the craziness begins to rise to the surface. Although only officially a state for almost 97 years, Arizona carries a serious reputation as a haven for all things paranormal and unexplained. Moving here from the D.C. area, I scoffed at the concept that anything in the Southwest could possibly be weird, other than the mountains being naked and the soil being hard-baked. Admittedly, it is kind of like living on Mars, but because so much of the state is exposed to the eye (nowhere to hide), it reveals some truly intriguing phenomenon that can't go missed.

Perhaps it’s the geology. From the Grand Canyon to the red rocks of Sedona to the mining hills of Globe and Bisbee, the state offers a scarred landscape that one could imagine giving birth to all sorts of strange energy. Sedona’s red rocks are said to give off strong magnetism and the ability to heal the body. The town is the site of four spiritual vortices that supposedly attract strange phenomenon and those seeking spiritual health. The very stones we find in the Arizona soil, from Apache Tears to turquoise to quartz, are all “healing” stones. What if we lived amongst rock that had heavy iron content? Quartz? Ancient volcanic beds? What might that do to our energy? Our power? Our healing abilities?

Having been transplanted here as a teen from Northern Virginia, I can attest to the fact that the sheer amount of sky can be unsettling at first. The fact that Arizona is a Mecca for UFO sightings doesn’t surprising me at all. With clear nights the majority of the year and tons of sky to view, if there’s anything there—we’re seeing it. The “Phoenix Lights” event in the 1990s might be one of the top 10 biggest and best documented and viewed UFO events in the history of mankind. The truth is, however, Arizonans have been seeing UFOs with such commonality that most folks I know just shrug when you tell them you saw one. UFO watching in Sedona is the newest hotspot and you can see it reflected in the town with aliens and UFO models showing up all over the place. Folks gather on the red rock to watch nightly unexplained lights in the sky. Sure, Arizona has a lot of Air Force present and the Barry Goldwater Range, but does that mean we’re seeing our own stuff or does it mean that someone else is watching our stuff? Maybe the creators of the Gila Bend Space Age Restaurant were only modeling after something so common they knew everyone would relate. You don’t usually see a UFO café in Massachusetts or North Carolina, but Arizona sports a few.

Running waterways are often associated with carrying spiritual energy. The Colorado cutting through the Grand Canyon would be a fine example of the power and influence of a river. When we think of the desert, we don’t often think of water, but because of it being such a precious commodity, it’s actually been our number one infrastructure preoccupation. The ancient HoHoKam tribe knew its importance and carved a massive canal system branching off from Mesa, Arizona. In fact, I don’t think it’s necessarily a coincidence that Mesa seems to have a higher level of reporting ghostly activities than other parts of The Valley. They might be onto something. Something as importance as water was used in ritual, bathing, and the water of crops for a people who were extremely spiritual. It could be assumed that perhaps water isn’t just a conductor of electricity, but perhaps spiritual energy, as well. It might not be a coincidence that baptisms involve such a precious and life-giving element. It has to make you wonder.

My favorite subject (just after ghosts) is Bigfoot. According to those in the White Mountains, he’s present in our state, as well. Although I’ve heard stories of Bigfoot clomping around South Mountain Park and Gila Bend, I find that a stretch of the imagination, but the concept a large hairy humanoid could be living in the White Mountains is entirely feasible. The sightings of Bigfoot in the White Mountains are some of the most professionally documented sightings in the world with the local police often being the witnesses, along with concerned citizens. And you know what they about “where there’s smoke…”

From Route 66 to Jerome, from Bisbee to Yuma, Arizona sites saw a great deal of fighting and unrest, vigilantism, outlaws, train robbers, sheriffs, and the forced “assimilation” of Native American citizens. The very ground is steeped in violent history, great adversity against the elements, and fighting over resources and mining rights. Arizona is haunted. Perhaps even more haunted than where I grew up in the Mid-Atlantic. That history was beaten down and lived over top of and “cleansed” of its past with shining polished woodwork and overly trampled battlefields. The West, however, feels like a still healing sore. Sometimes, you get the feeling the original dust still coats towns like Bisbee and Tombstone. You can almost taste the tang of it in your mouth. Most of the tales of hauntings involve outlaws, lawmen, and prostitutes. There are, however, tragic tales involving the hardships of living in the desert and the people haunted even after death by the tragedy. The one thing that struck me as a ghost hunter is that the East Coast seems to have a lot of haunted structures, but the West seems to have haunted land.

As if the history of the state isn’t full of enough oddities, at one point we formed the Camel Military Corps. In 1855, Congress agreed to the use of these camels for military purposes because of their ability to do long hauls in the desert. A Syrian named Hadji Ali trained the men to ride and care for the camels. A monument stands in Quartzite in his memory with his nickname “Hi Jolly” on it. With the coming of the Civil War, however, the program faded away and the last camel was released into the desert near Gila Bend. To his dying day, Hadji Ali believed that the camels still roamed the desert. Locals often reported seeing them. Eventually, over time, fewer reported seeing them, but an ominous ghost camel with a skeleton man riding it replaced the living camel stories. "The Red Ghost Camel" was reportedly a ghostly camel seen riding with a dead horseman atop of him. Still, folks who make a hobby of cryptozoology might be intrigued by the possibility that the camels that were released might still have been able to breed and exist in the Sonoran Desert all these decades later.

The 33rd parallel north latitude runs through Arizona, more closely to absolute 33rd parallel in towns like Florence and Clifton, although places like Chandler and Ahwatukee and Maricopa all share the 33rd parallel. The cemetery in Adamsville is located upon it and a medicine wheel in stone placed on the site (see picture above). The way the graves lie makes folks wonder if the Masons buried within the grounds were lining up along the parallel. The 33rd parallel has been associated with Freemasonry as a symbolic latitude. Although there is a great deal of secrecy about its importance, it’s been often associated with places of great conflict and death, such as the death row at Florence Prison and other sites along the 33rd parallel such as numerous other US death rows, and countries like Lebanon, Pakistan, and Iraq. I'm not sure I can personally vouch for the 33rd parallel doing anything unusual to my EMF meter, pendulum, or divining rods, but you know I had to go and test it. I did note, however, that the Adamsville Cemetery has a certain feeling when you stand in the medicine wheel and face north so that the 33rd parallel runs through your right and left arms...

This is only the tip of all things strange and paranormal in this 48th state. I’d advise you to do some research before coming to AZ. Knowing the best spots to get your bang for your buck are key. If you want an artist mountain retreat with spookiness, you might shoot for Jerome. If you want the same thing in an old-time westerner mining town and don't mind hanging with folks who don't want to be found, Bisbee is your spot. If you want to meet with spiritualists, get your aura photo taken, head to a vortex to stand in a medicine wheel, and study for UFOs at night, Sedona is the number one spot. Feeling nostalgic and like abandoned buildings, try Rt. 66 up north. Want to do a little antiquing in some quaint little desert towns, try Miami/Globe. If you want to walk through haunted buildings, I think density-wise, downtown Bisbee, Prescott,and Globe have more public buildings that just feel eerily haunted.

Got some time, google your own state for paranormal findings. You probably can't beat Arizona, but you might find something universal about the paranormal--it knows no Mason-Dixon lines or other boundaries. It settles in where the conditions are ripe and develops a rich history over generations.