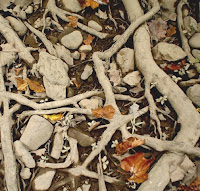 Everyone has a theory on the universe and our place in it. Just jump on a plane some time and take off over your city. It's just an aiport, then it's a city block, then it's an entire city, then it's a region of a state... You begin to realize how very small you are. Every day in your little neighborhood you feel so important and so central to everything going on until you see all the other "worker ants" from above.

It got me thinking about the universe. Scientists try to describe the size of it and its origins, but no one can possibly comprehend things that involve light years and distances that are "infinite." We can't get far enough away from it to view it as we did in the plane over our city.

What if every planet we see, every star, every moon, are all nothing more than cells in size to something greater? What if we look at other planets like cells in a body might look at each other and think, "hey, we're part of the important work being done," but then those cells don't see that they're just the tiny parts of a huge unit called a "human." They live their lives thinking that converting oxygen or transporting blood is all there is and their life is what counts the most. They have no idea how very many of them there are and how they are only a tiny component of a huge more important entity.

So, is our planet just a cell in a larger body that we can never stand back far enough to gauge. Are we only performing a tiny task within a bigger "entity?"

When we die do we get to see the bigger perspective? Is that what religious doctrine has been trying to explain in mere mortal words that can't describe something so shocking it changes everything?

I doubt our "little minds" could even imagine what that "bigger entity" is.

This is the kind of thing my mind contemplates when I sit under the stars at night. I guess some folks imagine traveling to the moon or think about tomorrow and the next day and the next. Not me, I wonder what I can't see.

I guess that's why I hunt ghosts.