WHY GHOST HUNT WITH TECHNOLOGY? 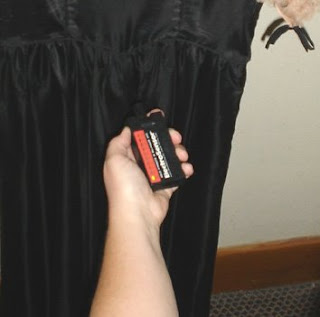 There's a real dichotomy within the ghost world of those who rely on their gut feelings and some Victorian-era devices such as ouija boards and seances and automatic writing, and those of us who have moved on to the new millenium.

I'll be the first to admit that I've had a lot of amazing things happen to me that I couldn't debunk and that were filed away in my mind as "phenomena," and yet if I tell you these stories, it's only theory and conjecture. It's entertaining and even at times spine-tingling, but it gets nowhere towards proof of phenomenon. If Einstein stopped with his theory of general relativity and never found ways to test it, it would have just been an intriguing idea from a quirky scientist. It wouldn't have changed the very way we handle astronomy and scientific quandaries. It wouldn't have finally let things like time and space be tangible to us.

In the ghost hunting world it's much like that. Spiritualists used to rule the communications with the other side like Jewish Rabbis used to talk to God for folks, then along came a dude named Jesus and suddenly people realized, "hey, I can talk to God myself without a paid-for representative." Opening the world of ghost hunting to everyone is to our benefit because guess who this phenomenon occurs for? Just the regular guy sitting in his house watching TV one night when he sees a full body apparition, or the little girl who talks to imaginary friend.

When Jason and Grant from TAPS sit in a room and shoot the breeze with the "occupants," they get the feel of the room, they hang out, they make themselves accessible. When something happens it can be quite extraordinary, but if they tell us about their experience it becomes just a story. Without the cameras and equipment to show us with our own eyes and ears, it's very hard to explain to someone or make them believe that phenomenon does occur and it needs to be explained.

Because of common drainage of batteries and equipment dying during hunts, it's entirely possible that by hauling all this electrical equipment into a place, we might actually be giving it a fighting chance of showing itself. I don't think it's an accident that haunted sites often relate issues with electrical and TV's going on and off.

Now, a lot of people still roll their eyes when you talk about ghost hunting with images of rigged seances and faked ghost photographs. The old-time ways really ruined credibility. Something like those old wive's tales about putting butter on burns, we know better now and we won't go back. I think there is a place for psychics in the world of ghost hunting but only in the aspect of helping us to perhaps find a place and a time that is ideal for phenomenon to occur. Then, hand it over to the folks who will try to weigh and measure and get actual proof with something more objective--electronic equipment.

I have a foot in both worlds because of my ability to read places and objects, but even I realize that's only a compass and not a backpack, swiss army knife, and sleeping bag. It'll take a marriage of scientists and test equipment specialists to help us make that final turn in the ghost hunting world from "before the world was flat" to "when the world was round." It may seem like a clinical way to go about it, but then we wouldn't expect the family doctor to pray and send us home, we'd want some medicine.

There's definitely a place in ghost hunting for Old World and New World techniques, but to depend on just one is to close your mind and to perhaps miss some important correlation that occurs when you're in the middle of feeling a cold chill and actually measuring it on a thermometer.