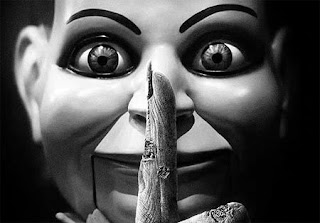 When I think of classic horror movies, I don't necessarily think of "The Mummy" or "Frankenstein," but I think of the era in which I grew up in, the 60s/70s. The one that started my fascination with horror movies was the 1963 "The Haunting" which I first saw on TV as a child. I remember (living a famously haunted house) how scary it was to watch something that was extremely feasible and in which--like all ghost movies should contain--an unseen element that is tormenting you. What's so scary about ghosts is--we don't know where they are or what they'll do next. "The Haunting" totally delivered on that count.

The elements that make a great horror movie are universal; mood, atmosphere, suspense, darkness, the unseen, and those who are vulnerable. I don't even like the movie "Darkness Falls," but I like a horror movie to take place in darkness and so I enjoy watching it just for that element. If you want mood, you watch "The Others" (if you can stay awake watching her boring days roll by). If you want atmosphere, you might consider seeing "The Changeling." If you want suspense, put on the movie "Amityville Horror. If you're into the unseen, "The Legend of Hell House" will have you wondering what the unseen spirits are up to. And, if you find solace in seeing others who are equally frightened and vulnerable, you might like "The Entity." There's no doubt something out there for everyone, except there's too little of it out there nowadays for those of us who like the unseen forces more than blood and guts. I know there's some sad folks out there scared of snakes and bugs and needles and blood and those slasher movies are horrifying to them, but what about those of us who fear invisible forces that want to torment us slowly, sneak up on us, and offer no way to "kill" them?

I'm pleased nowadays that there is the occasional good quality horror movie that has the 70's feel to it. "Dead Silence" was an excellent case for that. The music, the mood, the dolls (who isn't scared of ventriloquist dolls?), and the lack of ridiculous special effects made it very "other worldly" and sinister. "Silent Hill" was creepy and even with a heavy reliance on special effects, it only helped to put us in a world that couldn't exist which was very creepy. Sometimes when special effects are used in an otherwise serious movie, it falls flat real fast. Everything seems realistic up until we see a computer animation. Anyone who loved "Signs" by M. Knight surely must have cringed as I did at the end of the movie when the creature was full-frontal. Yikes! He had me up until that point so easily wound around his finger. Had he just showed the creature doing its thing as seen on the dead TV screen's reflection instead of straight on, it would have kept me shivering the entire time. I have to admit, I burst into laughter in the theater when I saw it.

I'd like to tell movie makers, spend your money on a great script or a great actor, and screw the special effects. You can make a movie that's dark, creepy, has atmosphere, draws us in, makes us shudder, and you never have to spend a penny on special effects guys. Leave that to blockbuster action films with Will Smith and SciFi movies. Don't taint the pool of scary movies with fake blood, hokey ghost figures, and animated statues. Don't assume we're so basic that we need to see knives cutting into flesh to scream. After all, look at how "Blair Witch" profited.

What's the ideal movie? Location: The house in "The Changeling." (With multiple levels, a central winding staircase, hidden rooms, banging pipes, gigantic and making the person seem small inside it) Atmosphere: "The Haunting." (With no sense of windows, cornered, walls breathing, doorknobs turning). Ghosts: "The Legend of Hell House." (With its truly demented past occupant who has absolute control).

My parents always said, "music was better in the old days." I say, "Horror movies were better in the 70s." Please, please revolutionize the genre by going retro. Do it now. See your fan base who cut its teeth on 80s/90s slashers find a love for what is truly horrifying, not some guy with a butcher knife, but a ghost with a hidden agenda.