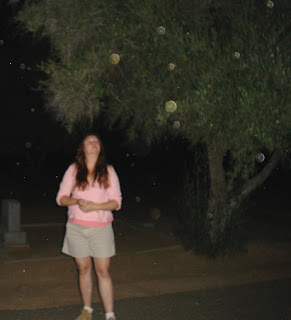 I've heard a lot of theories about what "ghosts" are. Even I haven't set it down in stone yet. I have theories, just like the next guy. It's time to revisit some of the popular ones:

Ghosts are souls of once alive people whose bodies have passed on and who do not know they are dead because of a tragic or untimely death. (I'm going out on a limb here, but I'm thinking if your soul has been torn from your body, you might notice that your hand can now go through a wall or become part of the wall, clue number one that you might not have a body.)

Ghosts are souls of once alive people whose bodies have passed on and who haunt the site of their death awaiting; revenge, a loved one's appearance, for someone to unravel the mystery of their death, or because they simply loved their house so much they refuse to leave it. (I'd think after the first week or so of trying to get the new homeowners to hear you or your message, you might go a bit daft. By the third or fourth decade, you might offer yourself up to hell or any place that'll take you.)

Ghosts are actually interdimensional beings able to move in and out of our world and theirs and can upon occasion be seen or heard. (They don't seem to serve a purpose coming here since they do little more than make boards creak and people shiver. I'd ask for my money back on that device that transports them--it's leading to their downfall as an interdimensional race and their sense of personal efficacy.)

Ghosts are a form of life as of yet unknown that evolved the ability to not be seen by human eyes. These life forms live alongside us sharing the same space, but have as little realization we are here as we do that they are there. (At what point in the evolutionary branch did we kick off the ability to be invisible? I'm just curious because technically we have that same ability if they can't see us either!)

Ghosts are actually alien life forms that enjoy observing us incognito. (Wickedly inventive and sinister. Especially when you're taking a bath at night and have a sense of being watched. They must be awfully shy and unimaginative if the best they can do in hiding themselves is show us glimpses of their form now and again, make moaning sounds, and occasionally make a ouija board spell out "no.")

Ghosts are residual events locked into a location by a strong emotion combined with the right geological/weather/radiation conditions to make them replay again and again and again. (If a ghost moans in the hole in the ground where his house once sat, will someone hear it? This gets rather existentialist. Anyone going to the site of a presidential assasination or sleeping in a hospital bed in an ICU should be overwhelmed by events replaying around him.)

So, what are the conditions and the ways we can weigh and measure the phenomena with some kind of consistency? You got me. We're still working on that one. Some folks might say that provoking is effective, others belief EMF meters show definite proof of a spirit trying to form. Still, others depend on psychics and ouija boards. The fact is, until we find whatever method these occurrences are using to show themselves, we won't be able to discern what it is, how to measure it, how to interact with it. We can only take signs and read things into them. If I ask a question and I get and EVP that sounds like an answer, am I having interaction? You got me.

Welcome to the world of theories and ghost hunting. Perhaps that's what so exciting about the field, anything is possible and as investigators, our challenge is to find out what works and what doesn't. I sense we're getting closer, but until we have an an "aha" moment, we're going to be stymied getting any further. Technology and science will be the catalysts that get us there. I can only hope more scientists and inventors out there enter the field and join us on the quest. I fear the only way we can entice them is to take out the "G" (ghost) word and insert "phenomenon."