POLTERGEISTS; TANTRUMS FROM THE OTHER SIDE? 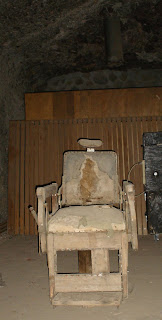 I grew up in a house that was not only haunted by its horrific history (a Civil War field hospital), with repetitive residual haunting, occasional signs of intelligence, but it also had poltergeist activity. In fact, to me the poltergeist activity was the most intelligent activity. The residual was mundane, kind of like hearing the furnace kick on, you don't really pay it any mind.

But, something being thrown across a room, crashing down, and disrupting the laws of physics...that's pretty attention-getting.

Whether a poltergeist (or "playful ghost") is an actual spirit having a tantrum or something manifested by a human in emotional turmoil (psychokinetic) or something in the realm of physics in which conditions are right for electromagnetic fields to be disrupted and cause things to defy gravity... has yet to be determined.

From my experiences in my childhood home, I've come to a temporary explanation that suits my logical mind, but makes my logical mind rebel at the same time. Mind you, my stand on ghost activity is that I refuse to fully believe that ghosts are actually souls of physically deceased humans. That being said, my conclusions on poltergeists (at this point in my research)is:

Poltergeists are the kinetic reaction to a force of energy launched from the "other side" (which could include a parallel universe, another dimension, or the afterlife), this launch being committed by a grouping's rather than an individual's power.

Phew! I said it. I know I'll get slack for this one, but just like the term "God" could mean a man in a robe and white beard to some and the cells of life to another, my vision of hauntings is quite open to my own interpretation depending on my own experiences and my logical mind's conclusions. At this point in time, I have not had a lot of exposure to poltergeist activity in the past few decades, but I experienced so much growing up that I can make some conclusions. The above paragraph is my conclusion.

How did I come by this? When I was a child I didn't think there was anything in the laws of physics that couldn't include something launching itself across a room without any seen culprit. I never asked the wind, "hey--who sent you?" So, I never asked the poltergeist activity, "who threw you?" Of course, as I grew up, my logical mind made me re-observe these situations in a new light and try to figure out just what the heck happened.

Many different varieties of things occurred growing up, often (but not always) tied to very strong emotional moments or perceived threats by the house by those occupying it. When a film crew came to film the house growing up and do a special on the ghosts, the wallpaper peeled off the walls, visitors had teacups that often separated from their handle while they were holding it in the air to sip. Wall hangings often swung. Ceiling plaster in whole rooms went boom! Cigarettes and brooms flew. Doors slammed. Paintings thrown... You get the picture. The house was freaky active.

Looking back, my conclusions are that psychokinesis by one of the occupants of the house would be ideal, but these activities occurred when different people were in the house. The house did not need any certain one person to be active. Upon occasion, it occurred when things were quiet and no one was worked up emotionally. The idea that a single spirit (assuming such a thing exists) were the culprit, it seems to me that something that has so much trouble forming itself to be seen or heard, would have to go through extraordinary power to move a physical object. A group; however, focusing its power could probably slam a door, lift something, throw something. I think that the incidence of poltergeist activity is so rare because it takes a "pack" of power to perform such feats.

Of course, next year I might have a new conclusion based on other observations, but given the strange outbursts, the power they exert to move something, the rarity of their occurrence, and the fact that no one person can be associated with it (at least in my family home), I have to think it takes a group of men to hoist a car off a trapped pedestrian and it takes a group to make poltergeist activity.