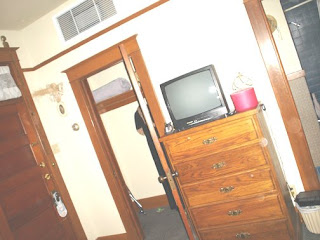 My favorite ghost hunting friend and I decided to take a weekend and drive up from Phoenix to Prescott to stop at every cemetery on the way there and the way back (8 total). We adore cemeteries and always take the chance to pick up the mood and take photos and fix up abandoned graves that are neglected.

This time, we decided we'd stay at a well-known haunted room at an adorable little hotel in Prescott called "Hotel Vendome." It was absolutely charming when we arrived with a deep comforting porch to watch the activity in downtown Prescott (small town personified in this old district). You can even order an iced tea and sit out there and rock and watch folks go by. When do we ever allow ourselves such luxuries? As a good Southern girl, I was all over that. But, once we finished our chat time and relaxing, we decided to head up to our haunted room.

Apparently, the building was once used as a hotel as it is now, but a woman with TB was abandoned there by her husband to ride out the rest of her illness with her devoted cat. They both passed away in the room that the innkeepers let her stay in. It's said her room is so haunted the hotel only rents out the "Abby" room if you request it and know that it's haunted. They even give you a huge album you can sort through of letters from folks who've stayed there and what occurred. Very spine tingling when you're up in the room.

The room itself is extremely creepy because devoted fans have left toys for the cat and cat statuettes and such for Abby in the room. The place feels like grandma's house on acid. If you didn't believe in ghosts, you might start to with dolls and cats staring at you.

It's said the cat can be heard scratching in the closet, so we took our our EMF detector, thermometer, and electronic voice recorder and decided to focus on that area first. We weren't disappointed. The EMF meter spiked up to 4 and 6 at times. It varied a great deal. We felt hair stand on end and a chilly sensation. It was like being watched. I went into the closet and stood there in the dark with it closed and felt something brush my hair aside on my shoulder, sending a deep chill through my right side. We decided to go to supper and had a great time at the local brewery restaurant where they were happy to tell us tales of their own ghosts. We went back to our room figuring the EMF readings would be there still and prove that perhaps some electrical ran through the room that set it off. We are both very skeptical by nature.

The EMF was completely gone. We could get no readings no matter where we held it up to. The sensation of being watched was lessened. We spent some time doing EVP sessions and even tried automatic writing with so-so results, but we were willing to try anything. At one point, my ghost hunting partner got deep chills. I clocked her skin temp going from 97 down to 66 and then back up again within a few minutes' time.

When we went to bed, I put my recorder in the closet and said, "I'm closing the door now, time for bed." I set it down and put it on sound activated recording and closed the door. We got ready for sleep and I pulled my sheets out from the corner of the bed--I hate feeling like I'm being held down by the tight sheets. My friend laughed at my silly quirks and I went to bed, but not before taking a shot of the closet door as proof it was closed for the night. I set the camera beside me on the bedstand and my friend and I went to sleep.

During the night, I heard scratching and it finally woke me up because I was annoyed. I felt immediately that my sheets were tucked back in at the foot of the bed. My feet were pointed and pressed down. It made me a bit hysterical. I hate that feeling! I pulled them free again and then realized that I had released them before going to bed. I grabbed my digital camera, turned to the scratching sound and took a shot. It woke up my friend and I said, "I'm just taking a nighttime shot." We both went back to bed.

The next morning, I got up and went to the closet door and opened it up to get my recorder. I played it back but there were no recordings. I figured it was a totally lame night and we both decided only the dolls haunt the room.

It wasn't until I got back to Phoenix that I found on my photos a strange crooked shot taken sort of sideways. The closet door wide open at night. I could see my recorder through the crack in the door where the hinges are. I realized then that this was the picture I took during the night. The shot before it showed the door closed at bedtime. The following shot after it showed our trip home. The closet door had made scratching sounds, opened during the night, someone tucked my feet in, and the door closed again after I took the shot.

I don't know if this constitutes a haunting. Although I'm extremely impressed I got this footage (and noted too that the hotel door could not have been opened by the owners as there was a latch inside the door that we use and they could not access). We definitely plan to stay again and this time run the camcorder for the night. It's a pain in the butt changing tapes, but it's worth it if we can get this closet door opening.

As a side note, I don't think it's so unusual we see ghostly happenings in basements, attics, and closets, they are the least frequented places in a home. If you have activity in your home and there's a place in it your rarely go, you're likely to run into something if you go there. Give it a try sometime. I find it's amazingly true.