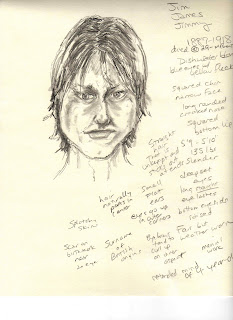 Everyone that ghost hunts has to admit, sounds are spooky, smells are baffling, chills are exciting, but what they're really waiting for is the most important sense to most folks--seeing. I grew up in a famously haunted manor home in all that time, I caught shadow glimpses of things, but never a full body apparition.

It took me giving up on ghosts for my young adult life and moving to Arizona and then in middle age deciding to go back to finding answers, that I ran into a full frontal ghost where I never expected to see one.

A group of ghost hunters and I got an abandoned jailhouse to ourselves one night. I wasn't expecting big things. The jailhouse was three stories but filled with about 40 folks making a lot of racket. My ghost hunting buddy and I took the top floor where the guards rested. It was a giant vacant room, 40 degrees outside, and filled with dust. We didn't expect miracles, as the place was a giant dust bowl. But, we set up a little "nest" in the corner with warm sleeping bags and our equipment and hunkered down for the night.

Occasionally other team members would wander through the attic room and then leave. We liked it that way. For a time, we had some semi-quiet for EVP work. Both of us got a sense of someone watching us in the room, a feeling we don't often get. We inspected every corner and took lots of pictures, but other than the typical dust orbs, nothing too exciting. The building was in the downtown area of a small charming town in Arizona. The faint lights glowing outside gave us adequate light to get around without the flashlight but not enought to see any detail.

A couple of folks came up at one point and began clicking off pictures. I was in the middle of talking to my ghost hunting partner when one of the flashes showed something that shouldn't have been in the room. Standing in the opposite side of the cavernous room was a man. He was average in height, perhaps 5'7" or 5'8", slender, wearing a dusty long sleeve shirt and jeans. He had his arms stiff against his body and his shoulders curled up with his head tucked down in the shoulders like a turtle. It was a very unnatural pose. His hair was straight and hadn't been cut in several months at least, a dirty blonde color. His eyes were deepset and vacant looking. He looked like a ragged homeless person and my first thought was -- oh my gosh! We didn't know you were here!

In that split second the flash went off and I saw him in full detail, I also had a strange sense about him. Although he appeared to be 3-dimensional, I felt as if I were viewing him in a 2-dimensional perspective. It's kind of like you can look at your kid in 3-D but then see him in a 2-D photo and it's still him, you just don't have a sense of depth. That's how I felt about this apparition. I also sensed he knew we were here and he was purposely allowing me this glimpse. When I jumped up and ran to the spot after the flash went off, there was no one there. The people taking the photo brought no one else with them. We gazed around the large room to find no one else there. He had not existed, and yet, I could see him so very clearly and in color.

When I got home, I sketched up his image with as much detail as I could. I can still see him in my mind's eye and the strange sensation he left me with, a sort of residue of melancholy and hopelessness.

I never expected on what seemed like a "lame" investigation to get my first full body apparition. You don't know when it's going to happen. You don't get a sense something is about to show itself. I always imagined a full body would be something like in the movies where you get a happy halo effect or perhaps they're transparent. I never imagined it would look like a holographic image being projected and not truly rooted into that spot, but being viewed there.

It had me wondering about a lot of things, but mostly why it seemed so out of place and then I realized that if it's something replaying in the right conditions, it could easily project anywhere that there's a set of eyes to see it. Perhaps even the conditions that make it possible for an environment to record an event can also cause a person to be able to see that event.

Still, I couldn't shake the strange and eerie feeling that he wanted to be seen by me at that exact moment. Maybe to give me hope. Maybe to point me in the direction I'm going and not give up ghost hunting. Or maybe just because he liked my gentle voice and perky nature.

I don't know when I'll run into one of these full-body app's again but I know that seeing one hungered me to see more. If what I got out of the experience was to treat every hunt as the possible "one," then I'm ahead of the game.

Because, even in the most boring sites, a little magic can appear with no forewarning.