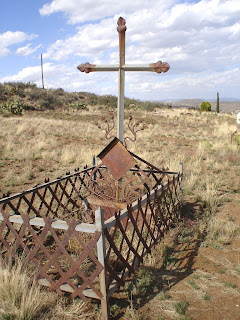 To study those who might be in the spirit realm, it really helps to understand how people interpret the passing of their loved ones. This is often in the framework of religious doctrines, explanatory style regarding death/grief as it occurs within the family, and our own cognitive distortions born from years of unchecked thinking patterns.

Ghost hunters have lots of motives, the majority being folks who had something happened they couldn’t explain, but almost all of them agree that they hope to find proof that rings true for them that there is “another side.”

If you want to hunt ghosts to prove an afterlife to yourself, you’re not alone. Even the best-meaning religious leaders don’t do a very good job of helping folks to answer all the “how’s” and “why’s” of passing. It’s that search for an explanation that fits that can send folks poking around abandoned buildings and historic sites in hopes of an answer that rings true.

Because I’ve had a very large family and an enormous amount of losses (being the baby of the family on both sides), I’ve had to escort loved ones from this plane from the time I was quite young and into middle age. To many around me, I’ve become a poster child for the grief process and reframing things. That same ability to reframe events helps me to keep a healthy perspective on ghost hunting, as I have no ego driving me to believe one way or the other on the subject of spirits. It would be wonderful if the people I love and lost still “live on,” but I don’t expect them to come knocking at my door at 3 in the morning and present themselves. Obviously, if spirits could just let us know they’re there, we’d be hearing from them every day and quite frequently.

The truth is, ghost hunters are searching for proof of attempted interaction. That’s about the best we can get. No lengthy conversations, no questions answered, no peek-a-boo. If a soul could show itself easily, we’d be walking around at night glimpsing shadowy figures around every turn. But they’re rare. And, because they’re rare, we are likely just as rare to them. Nothing more than a ghost to their ghost. A flicker that you try to reach out and communicate with and they at the same time try to reach for us.

At some point, we’re all going to lose people close to us. After all, we’re only allowed to borrow them and must return them when their time has come, but we can hope to make a bridge between our existences. Perhaps over time, we can figure out just what pathway is used to produce energy to communicate and we can prepare something that will allow them to “amp” themselves up so we can converse. That is, supposing we do actually have an afterlife. It’s also entirely possible we have time/space/events locked into place and we’re witnessing parallel events.

To satisfy my own questions, which will likely not be answered adequately in my lifetime, I’ve thought often about hooking up with a ghost hunting team I trust when I get much older (I plan on a ripe long life) and having them be present as I pass to try to document anything I can try to project as I go. I know, it seems strange, but it would be my final gift to research in the field, and my organs the final gift to the living.

Once you reframe how you look at the dead and living and realize we are all in a state of change, it’s not “us” and “them,” then you can ghost hunt knowing you’re contributing to a base of knowledge and evidence that will help us to someday answer that age old question:

Are you out there?