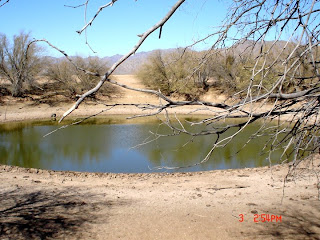 I’ve been living in Arizona the majority of my life. Funny, how I do not think of myself as an Arizonan. I suppose you have to be born into it. I do, however, find that the history here is vastly different than what I found growing up in the Mid-Atlantic state of Virginia: The land here seems to hold memories.

I wonder if part of this is due to the geological conditions, the lack of rain, the old HoHoKam water canals that carve into the desert that sent life-giving moisture, or the high level of Pagan spirituality that was expressed in the desert. If soil can be alkali from lack of rain, does this help the Earth remember events to replay them? to store them? to attract hauntings? So many questions run through my mind about the baffling conditions that create a haunted site.

When you think of England you often think of a lot of haunting of old castles and buildings, but you also think of the land as haunted. The same is true of places like the continent of Africa and the region of Scandinavia. I secretly wonder if perhaps Pagan practices by our ancestors helped create a mixture that holds power in the land. If Stonehenge was made for spiritual purposes on some important leyline, then perhaps that same Pagan knowledge that understood and was connected with the Earth points out the gateways to the other side.

These are all theories, but I would have to assume that any people who follow the Earth as their guideline to spirituality would be highly attuned to such places and events as what we deem the “paranormal.” I don't think it's coincidence that many Pagans choose to be ghost hunters and to use dowsing rods for tuning into spiritual "centers." Those ties to the earth and life cycles are a definite edge in the ghost hunting industry for finding the "sweet" spot that might be active.

Arizona has many sites of countless battles and much anguish by the indigenous people. People who were highly spiritual and in tune with the earth and seasons. If you find a good haunted site in Arizona it’s typical for folks to say “Indian burial grounds,” but they may be onto something. Any spiritually charged site is likely to evoke paranormal occurrences. The land lived on by the native citizens would have likely been steeped in part real world/part spiritual world. You can truly understand the importance of spirituality to the Native Americans when you realize they had to survive in a very brutal environment. Without that spirituality and ties to the land, they would not have been able to find food or water to survive the Arizona summers.

We may have an arid desert here, but it is soaked in Pagan spirituality.