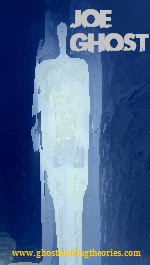 
That's what I've come to call the housemate that lingers.


Joe owned the house before I moved in. He passed away here in this retirement community home.
Bits about him came to light as we began to experience oddities.

I was stuck sleeping on the sofa in the living room that is open to the kitchen. I was waiting for my ordered bed to arrive.

Each night, Joe walked the galley kitchen, back and forth, opening and closing cabinets, clicking things, and upon occasion I would glance up and see his shadowy form heading toward the garage door.

The home's baseline KII readings were too low to calculate. No spikes except near my alarm clock slightly.

But, investigator Dennis Guern came over and had a lengthy KII session with Joe, chasing him in and out of the rooms. The back and forth with the meter was amazing. Pegged red in reply to each question. Then I started to ask questions and it responded to me.

I have never gotten the KII to react before in the house, but Dennis has a skill for impressing himself upon the other side. It was the most impressive KII session I've ever witnessed.

A few nights ago, I was asleep. I woke up to turn over and noticed I could see my bedroom very well. The door to the bathroom is always open and there is a motion detector night light plugged in around the corner in there. I could tell it was lighting up the bathroom.

I got up and checked the hall door. It was locked, as was the bedroom door. No one came in.

So, who triggered the light?

Well, moments later lying in bed pondering while the light finally turned off, I began to hear tromping footsteps in the room.

I sat up hurriedly. No one there. At least, no one I could see.

Click, click, click. Then, the tinkling movement of my necklaces hanging on a board on the wall followed by a slight bump into the rolling cart that holds the TV.

The slight whiff of cigarette smoke struck me. Did Joe smoke? (I need to ask someone who knew him!)

Interestingly, I've had issues with a little carving of an alien grey being turned around almost every morning. My team member, Julie Ferguson, found the alien on the floor when she arrived. 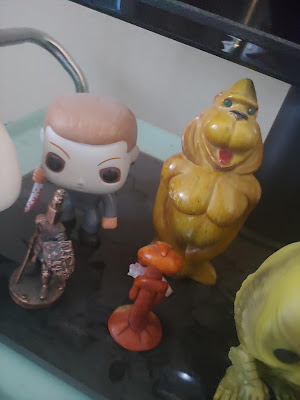 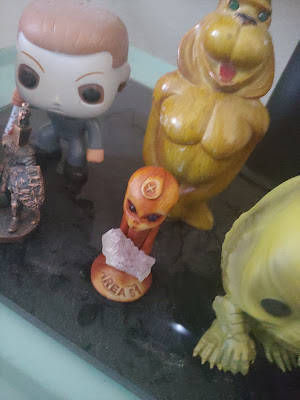 At this point in the night, I did not need a visitor. I needed sleep. So, I decided to give him directions.

"Joe, if it's okay with you, I'd like to sleep. Can you pace in the kitchen?"

I admit, when I first saw the nightlight on, I thought of the alien greys. When they visit, locked doors mean nothing.

I talked to a neighbor who told me Joe had been into spiritualist stuff, healing, new age subjects, the unexplained. And, now as I ask for more info, he finally reveals to me, "oh and he thought he was abducted by aliens."

I feel no malice or threat from Joe Ghost. He's rather lonely, it seems. Or bored. Geez, you'd think the afterlife offers some kind of activities to keep one going for an eternity!

I'm beginning to wonder if my lifelong contactee experiences might make me someone he wants to watch or protect. Maybe warn....

Perhaps it's just that I'm big time into the unexplained that I am an intriguing house guest....

There are other commonalities -

Our team, Arizona Paranormal Research, will be studying this subject in May. I am going to spend some time learning more about Joe. (One clue is that he had an American Lung Association sticker on his arcadia door).