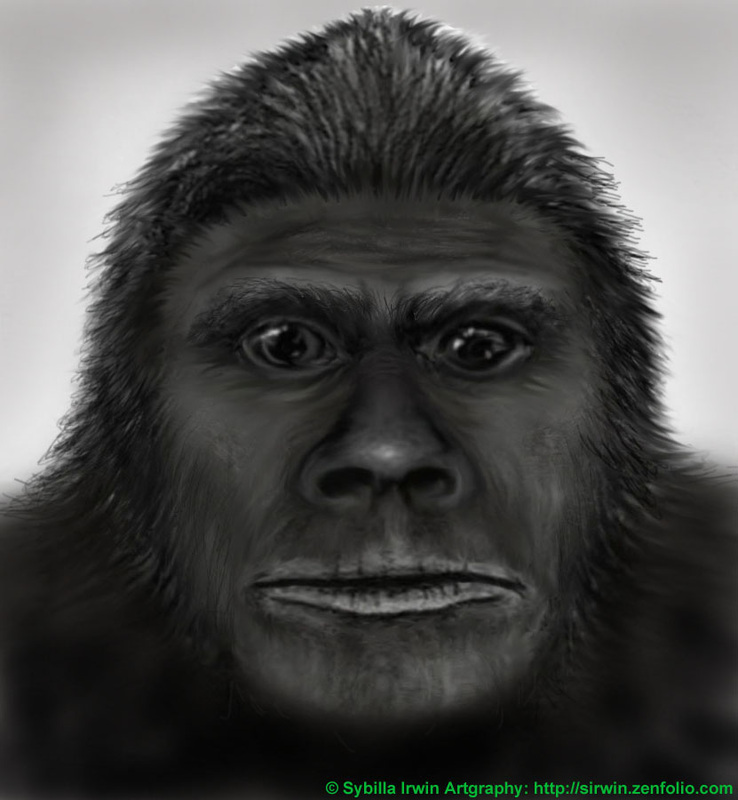 Today's concept is probably not a surprise to anyone - the correlations between ancient giants and Sasquatch - and they are many and significant, as I will be laying out for your consideration.

One by one, I plan to take you through features, similarities and possible correlations between the ancient giants and the modern-day Sasquatch. You might be surprised how this all works together like a precision puzzle. 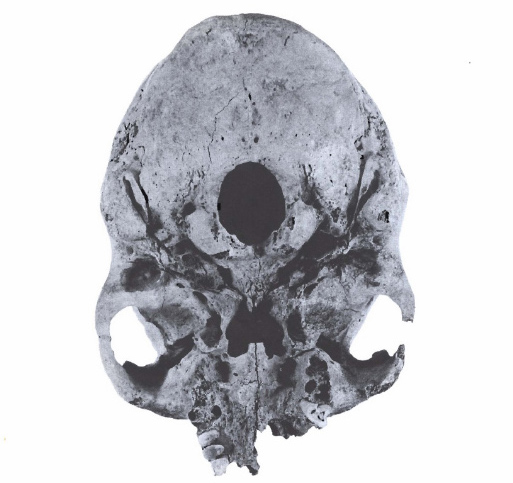 Head:  "Sloped forehead, pronounced brow ridge, crowded teeth with protruding looking mouth region, pointed back of the head, powerful mandible (jaw)." These are all reported by witnesses of Sasquatch. Interestingly, these are the same things reported on the skulls of ancient giants. In fact, in my  post about the slope-headed ones (perhaps the First People of America), the skull showed a sloped forehead, pronounced brow ridge, crowded teeth and an authentic os inca bone in the back of the head, creating a pointed head shape in the rear.

Interestingly in Peru, where elongated skulls were found of ancient origins, there is also a reported tribe of feral giants as reported on Bigfoot Encounters:

Lima, Peru May 22, 1976--- A one-eyed Indian tale of battling a band of red-haired hunchback giants has caused speculation that a tribe of stone-age aborigines may inhabit the jungles of northern Peru.  The men were described as olive-skinned, barefooted, hunched-back, more than 6 feet 6 inches tall with feet twice the normal size...
Carlos Tarrealza, discoverer of the ruins of a lost Indian city in San Martin Province said he had found the giants when he was lost for two weeks in the jungle.  He said they were clad only in animal skins with reddish hair and spoke a dialect he had never heard. He said they fled at his approach.

Other countries with reports of ancient giant finds with sloping skulls and present-day Sasquatch-like beings include Siberia, China, Australia, Himalayas and more.

Height:  Average height of sighted Sasquatch is at about the 8-foot range.  Ancient giant bone finds put the average at about the 8-foot range. Given that there were numerous ancient giant buried remains found in America and there is a reported race of giant people with the same skull shape and height - it doesn't take a big leap to imagine they are related. Sasquatch did not come from nowhere. They have to have had ancestors.

Hair:  Various Native tribes have reported the giants to have buffalo-like body hair, to be hairy all over, or referred to as "hairy men."  The Paiutes said the red-haired giants were "hairy all over." This is a feature we don't know much about because there are no witness accounts other than legends passed down through tribes for thousands of years. Of course, it's not showing up in on the remains that are dug up, so this is open for debate. Given a thousand years or more of feral living and it's possible they have grown their body hair thicker as a protection, as it's been found feral humans can grow more dense body hair.

No matter how much Europeans settled the United States since the 1500s, there is still a greater population density in the East Coast than the West Coast. This ratio would continue (catastrophes excluded).  Such is the case with the descendants of the Adena.  It would appear that the giants liked both large lakes and copper mining which are found in the Arizona/California/Nevada basin thousands of thousands of years ago and Michigan/Ohio Valley region, as well, where there was mound building. This map below shows the giant skeletal finds and the population density where (map below that) Bigfoot sightings occur today.


Lets look at the populations of Bigfoot and the populations of ancient giants more closely. We have locations like Australia and the United States, Mongolia, Himalayas and China where there are vast stretches of untapped land for them to survive, but what of now population-dense areas like France where the Castelnau giant was found (tallest officially recorded man over 11 feet and other exceedingly tall skeletons found near him)? French Mountain Ranges like the alps would have been the destination of such tall civilizations as the land was settled more and more with our shorter population folks. The sightings of Sasquatch-like man and locations of giant finds seem to line up quite neatly. 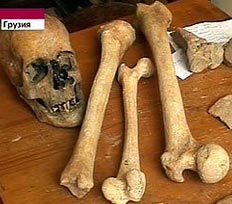 (Borjami Giant - above - Caucasus Mountains/Georgia, 9-10 feet tall, elongated skull.  Apparently, the finding of giants in the Caucasus mountains is nothing new. A Four-meter human skeleton was found by two amateur archaeologist in Georgia near the village of Udabno in the summer of the year 2000, and skeletons of giants were also found at a cave near Gora Kazbek, Georgia in the 1920's, not to mention the discoveries by Soviet scientists in the 1950's. On October 30, 1945 The Soviet News Agency TASS, and the Washington Post through United Press, reported: The Skeleton of a giant, with a skull 33 inches around and a shin-bone 33 inches long, has been found in the Tien Mountains of Russian central Asia north of the Himalayas). This region today has many reports of Neanderthal-like people.

I have repeatedly been told by Sasquatch researchers that they find them near burial mounds and it has been a constant curiosity to come up with a reason for their preoccupation with these ancient burial grounds unless their people carry the knowledge that their ancestors are there and the spots are sacred.

I found this little tidbit about giants in the Caucasus Mountains of Georgia - after creating havoc, this Hyskos tribe were banished to the Caucasus mountains where they lived in caves and reverted to animalistic behaviour. After 2,000 years the Egyptian Moses went to the mountains and civilised these giants teaching them how to cook and build and write. Moses gave them the laws from their creator, Yacub [the 10 commandments] sorcery, dark magick and how to divide and conquer the nations. Curiously, they were told that after 4,000 years, they would be destroyed.

This is an awesome article you should read - really!

In America, the accounts of Native people are that they drove the giants south - and we find that the Bigfoot population from Florida to Texas is enormous and going down the Ohio Valley along the Appalachians where mound building occurred, as well as finding them in the Sierra Nevada Range in California out of the Nevada lake bed area of Lake Lohantan where they were centered.

It would appear they have flourished in countries with larger wildlife areas and in population dense areas they were driven into the mountains or went extinct. The ones who might have built Stonehenge, in fact, might have moved on by boat to Europe and found more stretches of wildlife refuge and mountain passes that made it possible to continue on in bigger spreads of land, but over thousands of years, more feral conditions in purposeful seclusion.

There are numerous legends by Native American tribes of ancient giants.  The Paiutes told of a cannibalistic tribe of red-haired giants that they trapped in a cave and burned. In the 20th century, the skeletal remains were found in this now dry lake bed region. The Lenni Lenape have a legend of going from the west after a volcanic explosion and going eastward to find a tribe of giants (Allegewi) they fought the land for and drove down the Mississippi (ironically, right into the cradle of some of the most populated Bigfoot country). The Cherokee told of driving out giant pale-haired, pale-eyed beings who only came out at night called the Moon-Eyed People. Indian legends would suggest many encounters with giants in regions where Bigfoot is most often seen today.

Who is building these purposeful messages and why are they using hieroglyph shapes that even researchers (see photo below) can't seem to decipher?

Perhaps an even better question is - do they know what the symbols mean but won't share it with the public because it gives away the lives of the giants??? 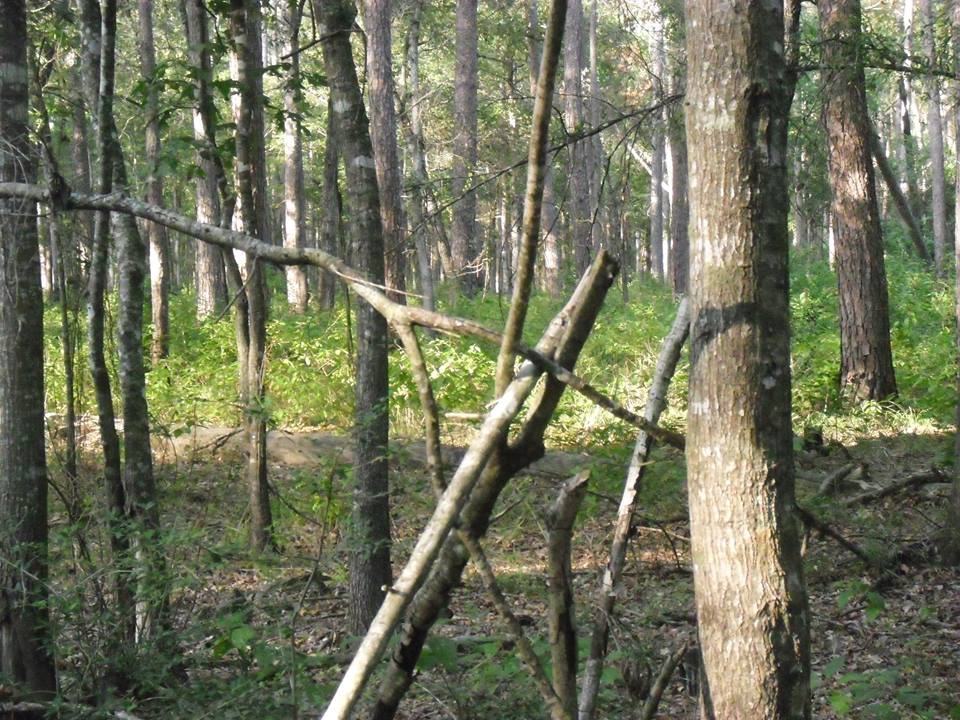 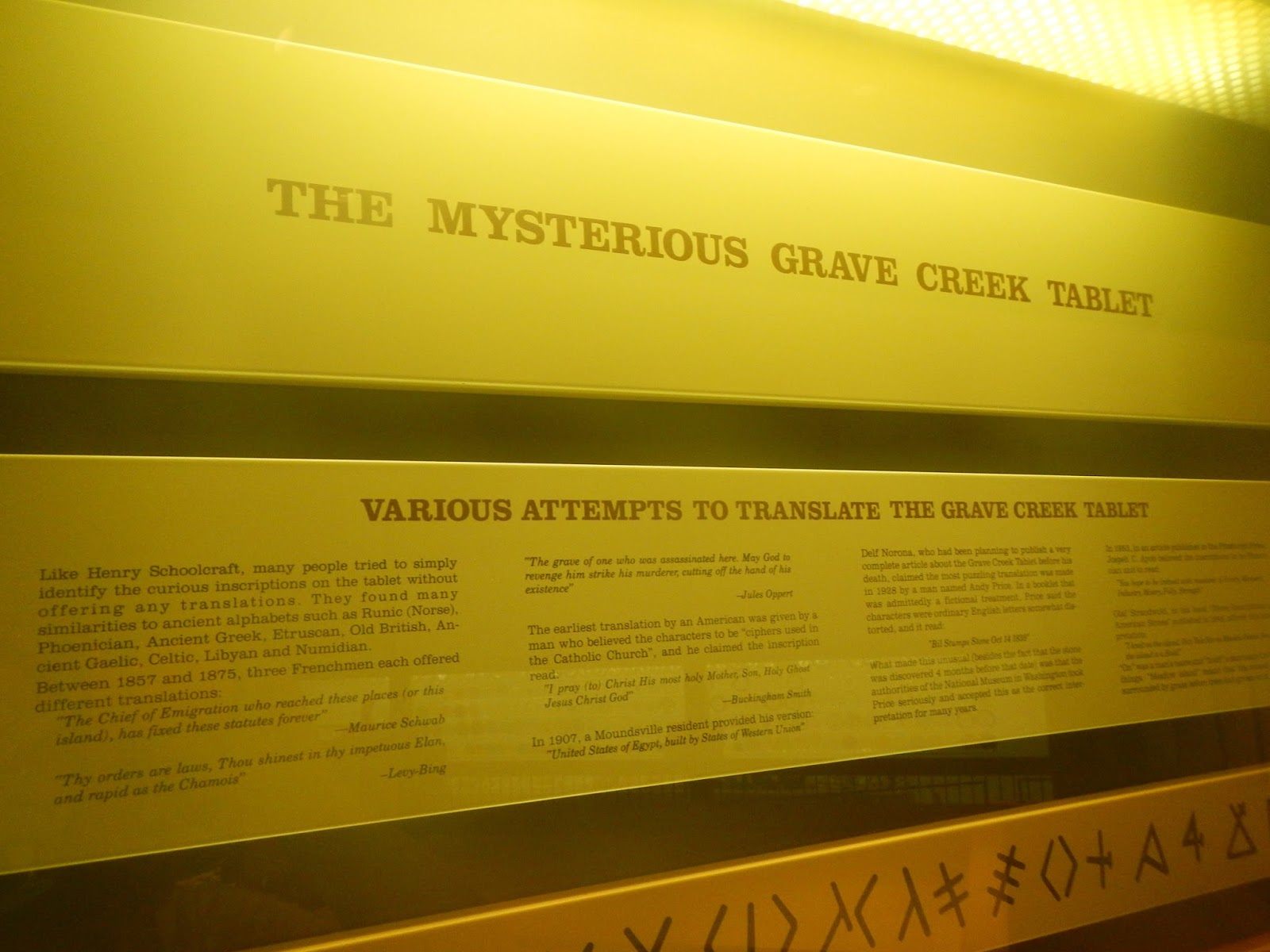 Here are the symbols found on the Grave Creek Tablet found at Moundsville, WV, left by the moundbuilders. 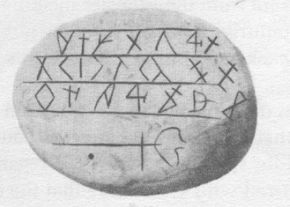 Use of Terms:  In this video below at the 4:02 time spot, you hear "Adena" spoken by a reported Sasquatch which is the name for the mound builders of the Ohio Valley.

The point of all of this is that, if we believe Sasquatch to exist, then they had to have a lineage. That lineage very likely has been uncovered in the only other tall race we know of in America - the ancient giants.

One more question - why would the government hide ancient giant skeletons through the Dept. of Ethnology and Smithsonian and make a law that all old finds must be buried by Native People in the area?  They don't recognize publicly the Sasquatch, so why would they reveal their origins?