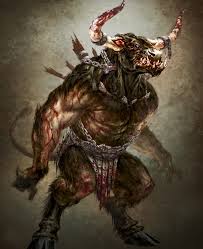 The Mediterranean cultures were best known for amazing mythology portrayed in great detail involving many abominations including giants. In fact, Greek mythology is so specialized and elaborate that scholars have spent entire lifetimes making sense of the amazing accounts, as Biblical scholars have of the Bible.

If you wonder how many Greek giants there are in mythology, have a look at this list - HERE.

POLYPHEMOS (or Polyphemus) was a man-eating Kyklops giant with a single orb-shaped eye set in the middle of his forehead.

He loved the sea nymph Galateia and wooed her with song, but she spurned his advances. When he discovered her in the arms of another, Akis, he crushed the boy beneath a rock.

Odysseus later found himself trapped in the cave of the giant who began devouring his men. The hero plied him with wine and while he slept, pierced his eye with a burning stake (classic tale of outsmarting the giants - were these people reporting not only of the culture of giants but that man brought them down to tell of a true history?). The blinded Kyklops tried to sink Odysseus' escaping ship with rocks, but failing in the attempt, prayed to his father Poseidon to avenge him. 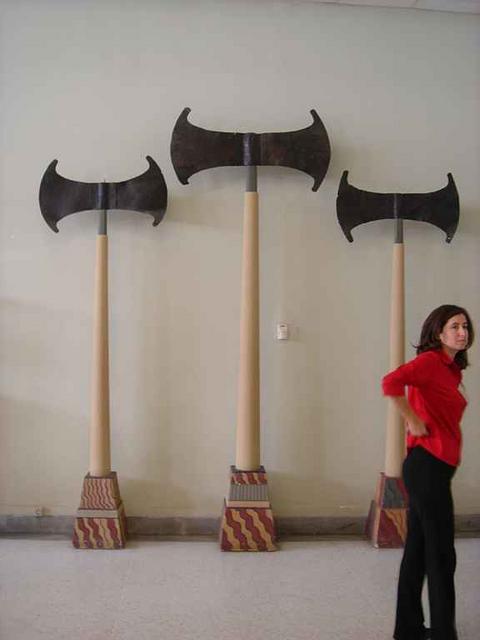 
Source:  It was a long-held belief that the Minoans (2700 BC to 1420 BC) of Crete had their origins in Egypt, but now DNA evidence proves they were European. What else might archaeology/anthropology been calling long for many many decades? 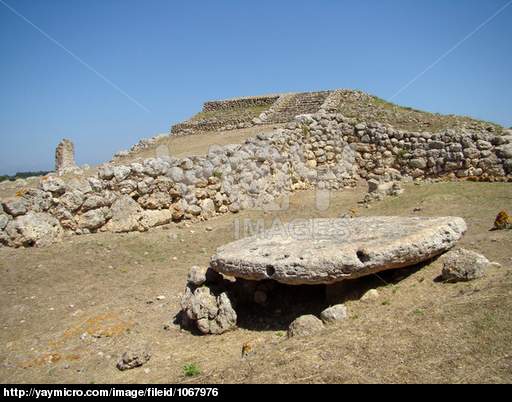 Italy - Monte d'Accoddi (above): Step pyramid and altar? Discovered in 1954, this structure dates back to 2700 to 2000 BC. Strangely, this was only found in the 1950s and it is a pyramid with a ramp which is called an altar, though information on it is rather vague. There is a little village there that has not been excavated. 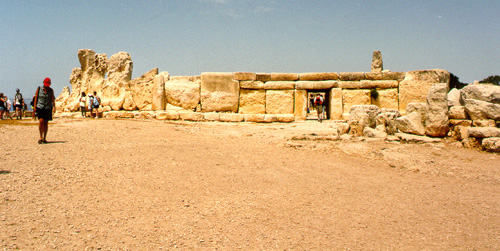 In the middle of the Mediterranean, Malta has some of the largest megalithic monuments. Dating around 4000 to 2500 BC, it was built without any heavy tools and yet the stones weigh around 50 tons. Although it's obvious the style was not by anyone local or the technology, the locals do like to take credit that they did it all alone with no help. It would appear it had a roof as most megalithic structures are beginning to reveal, meaning they were dark inside and very protected and not open air. 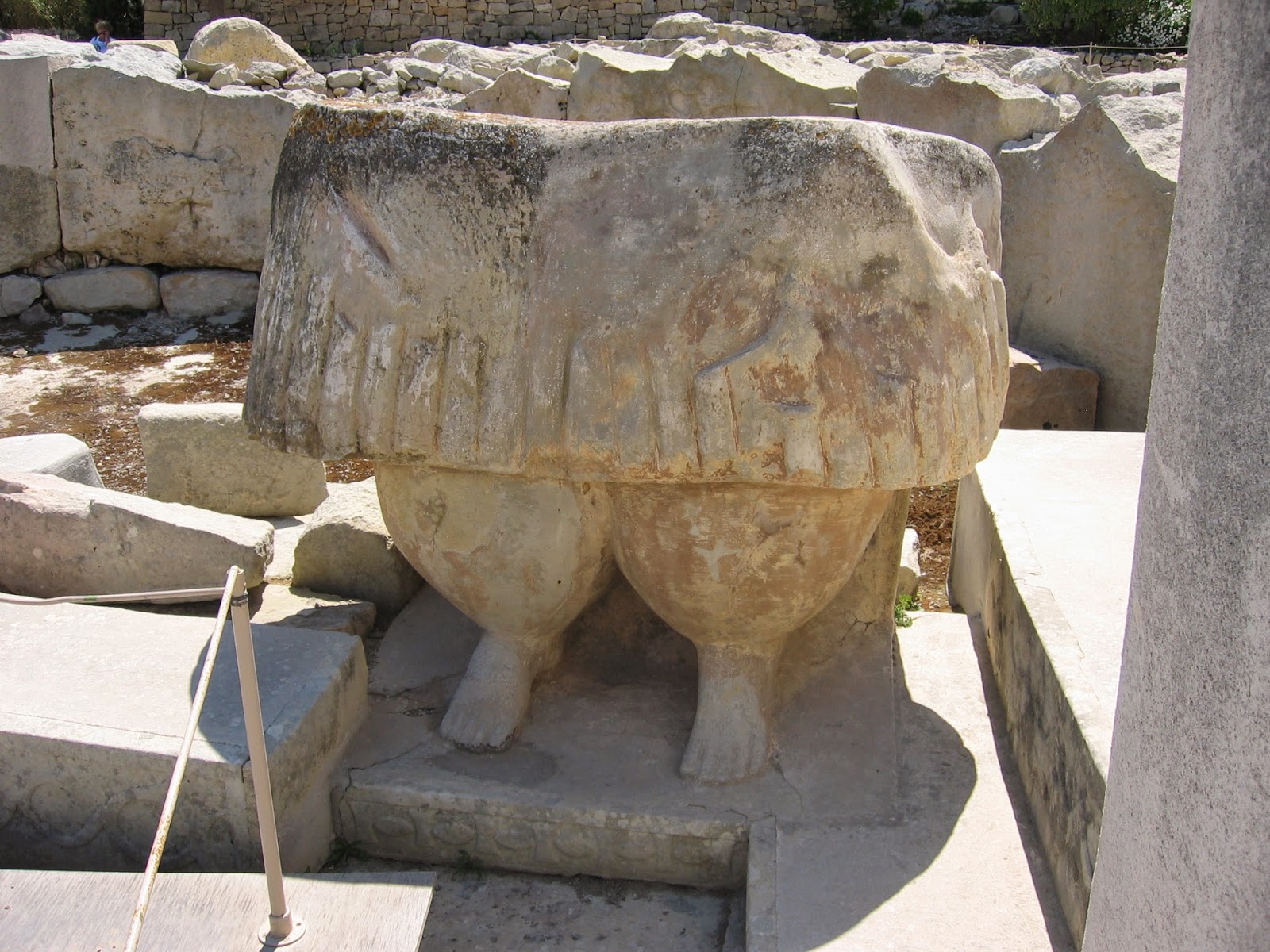 Source: Is the statue of a giant woman evidence that this structure was indeed built by giants, or for a Mother Goddess? Or both? Or neither? John D. Evans has pointed out that “many figures are genderless, and yet others are male. Some figurines are clearly female with well defined breasts and triangle motifs symbolizing aspects of fertility. However, there are far more genderless figurines than there are female ones, and this begs the question of whether indeed a cult of a Mother Goddess really existed.”

Source:  From about 2500 BC, the use of copper, formerly limited to parts of Southern Europe, suddenly swept through the rest of the Continent (and the Mediterranean).

This gets more interesting when it is revealed that the source of the copper was examined and found to be Michigan! Yes, those giant globe-trotters! 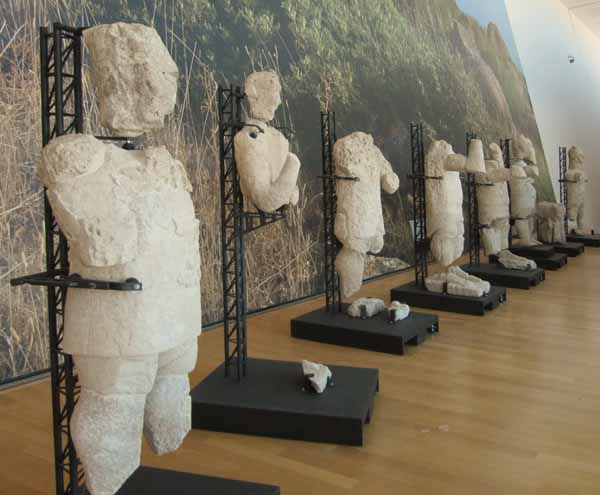 Mont'e Prama in Sardinia a farmer in the 1970s hit a stone in the ground and then a cascading event of discovery began, unearthing giant statues dating from 8th Century BC and measuring 6 feet tall. The warrior statues held their shields above their heads in a style that would not occur for centuries later in Greece. 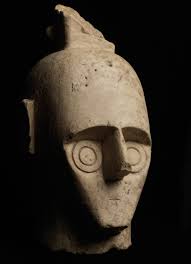 Ajax: In Greek mythology - In Homer's Iliad he is described as of great stature, colossal frame and strongest of all the Achaeans. Known as the "bulwark of the Achaeans", he was trained by the centaur Chiron (who had trained Ajax' father Telamon and Achilles' father Peleus and would later die of an accidental wound inflicted by Heracles, whom he was at the time training), at the same time as Achilles. He was described as vicious, fearless, strong and powerful but also with a very high level of combat intelligence. Ajax commands his army wielding a huge shield made of seven cow-hides with a layer of bronze. Most notably, Ajax is not wounded in any of the battles described in the Iliad, and he is the only principal character on either side who does not receive substantial assistance from any of the gods who take part in the battles, although, in book 13, Poseidon strikes Ajax with his staff, renewing his strength.

Hal Saflieni Hypogeum is the world's oldest and largest underground temple in Malta. Within were found elongated skulls. It dates back 5000 years and gets even weirder, it has strange acoustic properties. (Acoustics are something I've been looking at in relation to the giant culture and some of the symbols including the spiral).

The acoustic properties within the Hypogeum have already been studied extensively. It was found by Maltese composer Ruben Zahra and a research team from Italy that sound resonates at 110 Hz within the Oracle chamber, and this matches the same or similar frequency that has been found in many other ancient chambers around the world, including Newgrange in Ireland. According to Dr Robert Jahn from Princeton University, it may be the dimensions of the room or the quality of the stone that determines the exact pitch of this echo behaviour. But the question remains – was it intentional? Was the Hypogeum actually designed to enhance amplification? If so, why? Is it possible that the designers of these spaces knew something that modern scientists are just rediscovering? One theory put forward by Paolo Debertolis and Niccolo Bisconti of the Universities of Triests and Siena respectively, is that the chamber was constructed in such a way as to created acoustics that would affect the psyche of people, perhaps to enhance mystical experiences during rituals, and this perspective has received scientific backing. Dr. Ian Cook of UCLA and colleagues published findings in 2008 of an experiment in which regional brain activity in a number of healthy volunteers was monitored by EEG through exposure to different resonance frequencies. Their findings indicated that at 110 Hz the patterns of activity over the prefrontal cortex abruptly shifted, resulting in a relative deactivation of the language centre and a temporary shifting from left to right-sided dominance related to emotional processing. This shifting did not occur at other frequencies.

I have been studying on the side, the concept of Sasquatch and use of infrasound and its influences. There is a human with infrasound capabilities because of extra long vocal chords. A being who is 8 feet tall should easily have that, hmm? So, why was rock construction in certain methods so important to these ancient people and why do native legends tell of them making sounds that would bring people down? Hmmm

To some, the Mediterranean is the seat of civilization and it is obvious it had all the right elements for any civilization to thrive with sea, fertile volcanic grounds and mild climate.

Greek mythology and ancient sites around the sea give us many clues as to the role of giants. An interesting aspect of Native People is that they pass down the fights their people have fought through the ages and it is carefully and painstakingly given to future generations. Was there a Cyclops? Was there a Minotaur? Perhaps there were giants of all kinds encountered and dealt with and stories were created to explain something that was so overwhelming and humbling, terrifying and revered.