The Origins Of Ancient Giants: My Hypothesis 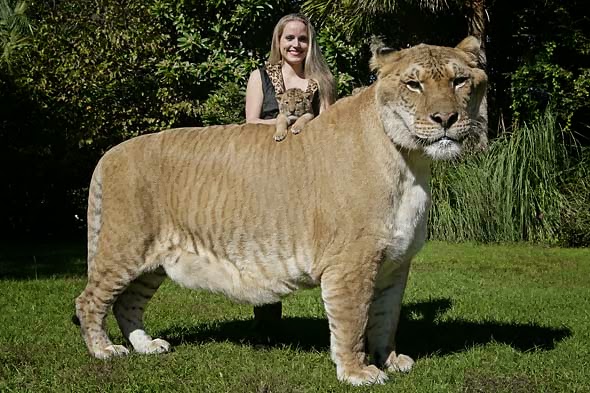 Lions have a gene that basically says, "dude, you're running in a pack, you need to have powerful DNA content to mate with a female lion and father a child and continue your line, so be aggressive DNA." (simplistic explanation)

If you take a male lion and mate him with a female tiger, you get a liger. A liger is substantially bigger than either parent ever were. If you mate a male tiger with a female lion, however, the tiger does not have this aggressive DNA and so he's regular sized.

My hypothesis is that Neanderthal and Denisovans both went extinct eventually, but their DNA is found in our modern-day DNA. They both might have had this aggressive DNA in order to try to mate within a small grouping or dating pool in a sparsely populated world. If one of them mated with a female homo sapiens - a large child with a sloping forehead and prominent brow (ancient giant description from skulls found). They would have DNA of Northern European or possible South Pacific origins if we did testing on giant bones today. If these people mated among themselves, they would continue to produce tall children and an entire race. 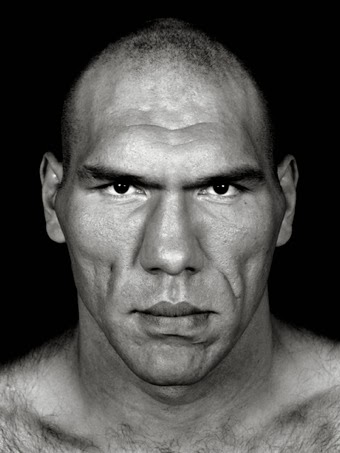 This man above is a classic giant Neanderthal type. In the case of mating between a giant and a human, that "aggressive/dominant" DNA from a male could produce some taller than usual offspring in future generations and some features, like these facial features, in the offspring. These traits show up in our population and this might be the explanation. We know we have Denisovan and Neanderthal DNA in modern humans and some of these facial traits could be explained by their genetic influence.

Interestingly, ancient giants in Catalina island were found to be blond and of Northern European descent. No doubt some papa Neanderthals mated with some Homo Sapien females along their arduous trek. ("The Ancient Giants Who Ruled America: The Missing Skeletons and the Great Smithsonian Cover-Up" by Richard Dewhurst).

What is intriguing is that these giants were reported here before paleo-indians arrival. If that is so, and they had language, hieroglyphics, tools and more, the mixing of these two divergences of human might have created a very bright and very big offspring, giving them both perhaps the intelligence of homo sapiens and the spirituality of Neanderthal or some such mix. Some ancient giants were described as having coarse black hair and that could be a mix of Denisovan male/homo sapiens female.

In fact, we might want to call these crossbreedings with homo sapiens females:

So, my proposal is that Neanderthal and Denosvans did not go extinct, they evolved into a giant race of people with blond, red, and black hair. And, we called them ancient giants.

In fact, we could take it a step further by explaining today's Bigfoot in terms of the evolution of these giants, with varied hair coloring, living in the same regions ancient giants did, and having adapted protective hair covering or a gene variant that created hormone release and overproductive hair growth, aka hypertrichosis, sloping foreheads and rather conical-looking skulls.

If we wonder why the powers that be have covered up finds of ancient giants, all we have to do is look at the time period in which many of these finds occurred. The skulls were obvious Neanderthal-like and yet these ancient people were showing civilization and size that were incongruent with what researchers thought they knew of evolution. Imagine telling citizens that, not only was evolution real, but Neanderthals might have been smarter than homo sapiens in the past.

Want to test your DNA?  Compare DNA testing sites to find the best one - HERE.