They're back on Animal Planet tonight!

You know, I live for F'ing Bigfoot fun. I love the interviews with witnesses, the locations, and the odd tools they use in the field.

Which item have they NOT used to entice Bigfoot? 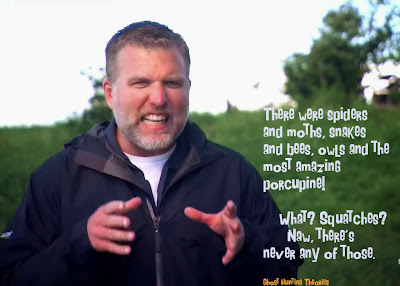 My favorite member, Cliff, is not only seriously enthusiastic about the subject and nature, but he spends an enormous amount of his own time outside of the show researching, hiking, camping, and trying to elucidate answers about the Tall Guys. He's a gosh-darn all around good guy.

Ranae is smart, level-headed, honest, and won't tell them what they want to hear, but what they need to hear - a voice of reason. Sometimes, it falls on deaf ears. Other times, she is the one left baffled by something unexplainable. She holds her own up against the guys and is fearless and driven by a very logic-based, highly intelligent mind. 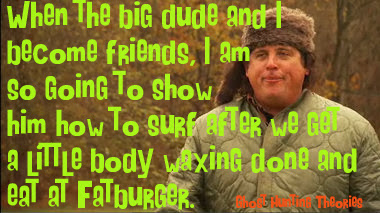 Bobo may be folksy and casual, but his obsession with the Tall Man is an honest one and he's willing to go anywhere, do anything, just so long as he can break bread with his new buddy. He's a wonderful balance to the often dower-faced no-nonsense leader. 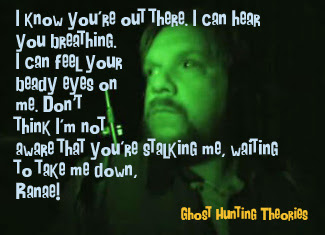 Matt is the leader of the team and sometimes butts heads with Ranae in a delightful way I portrayed in some of my comedy pieces (LAUGH button at the top of the blog). He sometimes dances the edge of paranoia and suspicion about Bigfoot and believing that everything is proof of Bigfoot. He has inspired many of my memes because he's just so, gosh-darned entertaining.