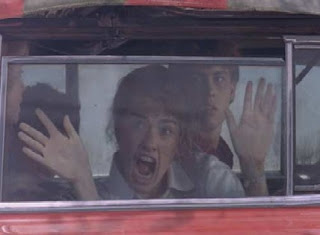 Have you ever had a nightmare that just stuck with you for a long time?

I was up the other night, watching "The Walking Dead" when I was getting ready to go to sleep. I switched the channel and saw a bit of "The Mist." It had me confused before going to sleep and I had a nightmare that was amazingly real....

In the dream, I was in the back seat of a car. The car was full of other people, probably 4 others. Two in the front seat were dead and the ones in the back seat with me were crying out and upset and pounding on the windows and I was telling them to stop doing that. It was over. We were done.

I scrambled through my purse as I began to feel really weird in my head. I grabbed my lipstick, tears streaming down my face, and I tried to will my mind to still work as I wrote backwards on the window, "we used to be normal." I knew it would be my last message. I grabbed a gun from the floor of the car and shot the two people next to me and then turned it on myself as I was turning into a zombie.

I woke up, heart pounding, but I remember that feeling I had inside, that resolve that I knew this was the end of the line, we were bitten and going to change, and all I could think of was to leave a reminder that we were once human and once normal.

What sorts of nightmares have you had that haunted you long after like this one?